Confession time.  Remember a couple of weeks ago when I spent half a paragraph raving about a big old vintage sewing machine?  See here.  Well, guess what?  The dratted store didn’t sell it and when I went back it was still there.  After writing about it and thinking about it for a couple of weeks, it was just nagging at me, and plaintively calling my name (That’s my story and I am sticking to it!).  So, now it is living at my house!  The machine was made in the late ’30s and on investigation it had a whole box of attachments including a zigzag attachment (Who knew they had those in the thirties?) and the button holer.  It also had both of its original books.  On the down side, it needed a new rubber wheel for the bobbin winder, and for some reason there was only one bobbin.  A quick trip to our local sewing machine place and $13 later, I had a new rubber wheel and five new bobbins.  Now the only thing left is the cord, as 80-year-old electrical cords are a bit dicey, but as it was made when they expected you to fix things, that won’t be a problem.  For now it runs like a dream, and looks fantastic.  I guess I really did need another sewing machine!

Well on to some things that no one needs.  We are worried about Raggedy Ann:

Why is her middle an empty box?  Is it a metaphor the emptiness of existence meant to depress even the smallest of children?  Surely she didn’t come full of candy, or soap or some other semi-useful commodity.  Not that useful isn’t good, really it’s great; that’s why I needed another sewing machine.  (I may keep beating that dead horse, till I am thoroughly convinced.)  Why add useful to useless as this must have been, as here it is at the thrift store.

These are also useless × 2: 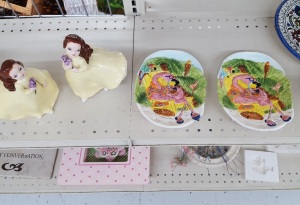 Nope, you don’t have to adjust your vision, there are two of each of these horrendous objects.  The two little girls in yellow might have a vague excuse, as they were someone’s ceramics project, but the question is always begging as to why?  Really, if one is ugly, there is no need for more.  The pseudo plates were so textured that they would be useless to put anything on, and to top it all off, they did horrible things to flamingos.  Quick, call the ASPCA.  The summer intern, who has always been a flamingo fan, was horrified.  I thought he was going to make me buy them, just so we could take them home and do some sort of Greek dance that involved plate throwing.

I know folks are missing sports, but this just goes too far:

Either that, or it belonged to one of those long-suffering sports wives, who didn’t want to have to decide what type of party they were going to this week.  Just pass the wine, and show me the guacamole, and whatever is on TV is OK.  Now that I think on it, my money is on the last one.

We were discussing causing permanent emotional damage to your children earlier.  Well how about trying it at birth?

Several of my mom friends and I have always said we should just start a fund now, so we could pay for the inevitable scars we caused our children (at least that is what they are going to tell their therapists) but none of us were ever this mean.  We just made them tell us where they are going, come home on time, do their homework, learn a modicum of manners, and occasionally, embarrass them in public by singing and dancing.  We would never be this cruel.  No one should ever have a clown hanging over their bed.  Everyone knows this, or there would not be horror movies about it.

You know us, we always have to stop and look at dolls.  We stopped; we were sorry:

Honestly, you don’t get the full effect of the scary eyes through the bag.  Deb took this pic on a trip without me, but I saw it today and now I know why she was in the photos.  Just be happy you can’t really see it.  Oh, and to make it worse, she was a tree topper:

Do you really want that on the top of your tree?  And doesn’t black and white just scream Christmas to you?  Some misguided Grandma worked for ages on this.  She should have just made a pot holder.  At least you could use that and hope it caught fire in one of those freak cooking disasters.

And now for a few signs.  I don’t think this one needs any explanation: 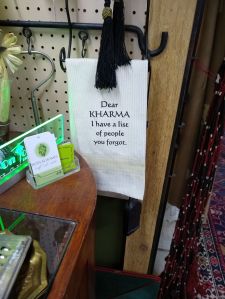 Don’t you just wish you could put in a request and have it go through?  I have a really long list.  Where do I send it?

This sign caught our eye at the thrift store, only because of its screamin’ 1970s vibe:

It seemed like a rather odd sign to hang most anywhere.  In my kitchen you’d better believe lunch is not free—it comes with strings attached.  You really wouldn’t want this where the general public could see it either, because who knows who would coming around insisting on being fed: your children, your husband, the neighborhood cats, and the bum on the corner.

When we turned it over, it became slightly clearer:

All we could think is that there sure must have been quite a bit of alcohol involved in the lunch that preceded the shopping spree.  We just hope the rest of the things that came home from that epic spree were better than this.  Maybe just some more booze.

Life is tough right now; you have two choices.  Laugh or:

We don’t know if these came in together, or it was just some random letters that worked at the moment.  No matter what, we hope this little cry made more than just us smile.  Who says thrift store workers don’t have a sense of humor?  Never us.

One final item to make you smile:

I purchased this bag a couple of weeks ago at an antique mall in Cheyenne WY.  I have a soft spot for Enid Collins bags, as does Deb, and this was priced reasonably for one of her animal box bags.  Plus it’s a small purse—doesn’t take up a whole lot of room.  On the down side, it’s a small purse.  (Both good and bad!)  I was going to carry it this week, and my wallet doesn’t fit!  Oh well, I love it anyway.

A look at a slightly different logo for her bags: 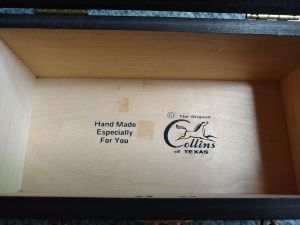 If anyone ever has any of these they want to re-home, feel free to think of us; we will wrestle it out later!  What’s not to like: glittery stones, boxes, purses, they have it all.  They make us happy.  Good thing something does these days.  Please stay safe, wear a mask and try to keep a smile on under there!