Lucky for us, but maybe not so lucky for the rest of you!  We see these vintage (mostly) craft books and laugh ourselves sick at the projects themselves and the examples we’ve seen over the years.  Kathy came over in February and showed me a craft book she had found at Who Gives a Scrap?  We laughed at the book, and then I whipped out this baby and it was contest over.  These plastic bottle crafts are the Unholy Grail of bad crafts for us.  Our mascot is but one example.  Poor Ruffles the Ugly Bunny remains the worst thing we have ever seen and that’s saying something!  There have been some contenders, but really, he has a face only a mother, or maker, could love.  How I wish I had bought him when we first started out; he’s made us laugh for more than 10 years.

Does anyone remember the craft store, LeeWards, any more? 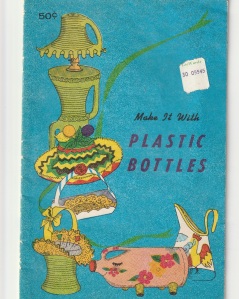 LeeWards started in Illinois in 1947 and was purchased by Michaels in the 1990s.  This craft book from 1963 was printed by Graff Publications for a whopping 50 cents, which wasn’t all that cheap.  According to CBS News, gas was 30¢ per gallon, and a loaf of bread cost about 22¢.  An average American made $4400 per year, or $84 per week.  A person had to really want to craft to spend 50¢ on patterns!

The back cover gives you an idea of what else Graff Publications was printing: 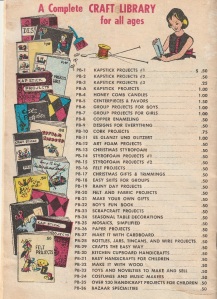 I would be interested in seeing the Copper Enameling booklet, and the felt and fabric crafts could be fun.  I’m curious (not in a good way) about the Styrofoam projects, including Christmas Styrofoam.  The Easy Skits for Groups sounds like something we were forced to do in Girl Scouts!  This list has something for everyone to laugh at.

I just had to include the introduction and table of contents: 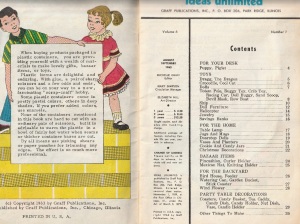 Just so you know what you’re dealing with, let me quote starting at the second paragraph:

Plastic items are delightful and enduring.  With glue, a pair of sharp scissors and a few odds and ends, you can be on your way to a new, fascinating “scrap-craft” hobby.

Oh my!  I myself might have said, “… a new, fascinating ‘crap-tastic’ hobby” , but potatoes potatahs.

Let’s start out with something that generally makes Kathy and me happy: 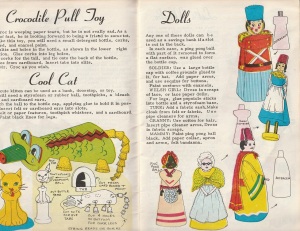 Dolls, right?  Not as easy to make from plastic bottles as you might think.  I give them credit that there isn’t an Aunt Jemima copycat, uh … never mind.  I can’t really imagine that a little girl or boy would want to play with one of these scary things instead of Barbie, Chatty Kathy, Penny Brite, or any doll that was available in 1963.  Who on earth gives a child a Turk doll or a Welsh girl doll?  Mom, honestly, Barbies only cost $3 in 1963 and you spent 50¢ and time on this mess!!

I have to say that I really want to make Kathy the Cool Cat on the opposite page.  As any good toy, it starts out as a bleach bottle.  Just add paint, a Styrofoam ball, felt, and toothpick whiskers and what child wouldn’t be delighted?!

I’m thinking that Cool Cat is about a 1000 times better then some of these “toys”: 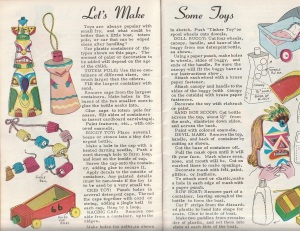 The toy at the top left is a totem pole, which I played with for hours as a kid!   The weird pink thing next to it is described as a “Buggy Toy” which is filled with beans or stones, decorated with decals, and then … the fun begins?  The racing car might be okay if your tot has never seen a toy car before.  I’m pretty sure that any kid who had encountered a Tonka truck or a metal diecast race car would shove this plastic car to the back of the closet, or maybe smash it with a Tonka Truck.

I’m leaving the most disturbing thing for last.  I’m referring to the “Devil Mask” on the right side of the picture.  What’s more horrifying—the thing itself, or the idea of a child wearing it, terror showing out of the eye holes?  Mommy Dearest should set up a therapy fund immediately after inflicting this on her child.  I cannot even imagine how this craft was designed, approved, and put into the booklet without someone saying, “Really?”.  I was living in the 1963, and none of my friends’ moms would have done this to them; not even for Halloween.

Just a couple more as the thought of that mask is really agitating me: 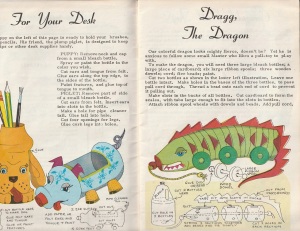 The two friends on the left are for your desk.  Puppy can hold your pencils, pens, and brushes, while Piglet can hold paper clips, and other “desk supplies”.  You know, they seem almost tame.  I do have a question about why none of the animals seem to be able to keep their tongues on their mouths.  I’m not sure that the piglet is really better than just keeping things in the middle drawer of your desk.  I guess when all you have to work with are plastic bottles, you start to get kind of crazy trying to come up with enough projects.  Maybe that five martini lunch didn’t help either.  I don’t have much to say about Dragg, the Dragon.  Cool beans if it’s your thing.

I have several more to share, but I’ll just save them for later.  I hear my bottle of Bombay Gin calling my name, plus I want to go out with a bang: 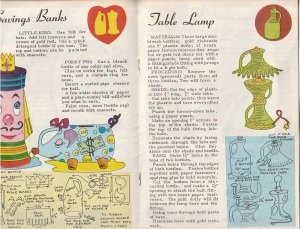 Or maybe a fire!  Who thought it would be a good idea to make a real electric lamp out of three bleach bottles?  Not me!!  Besides the fact that it is as ugly as sin, I mean just look at that shade, it’s a hazard.  It’s decorated with gold rickrack, brass fasteners, and gold foil and or sequins—uff da!  I would be worried about putting an outdoor Christmas light bulb or a nightlight bulb in there, never mind a 40 watt bulb.  I wonder if bleach bottles melt before they start burning and releasing chlorine gas all over the house?

Hope everyone is hanging in there and being safe.  I’m feeling better, really!, now that the weather has improved.  Being outside is therapeutic and makes you feel a part of something again.