Before I start up the regular post there is something that Kathy and I want to talk to you about—there is a problem that’s come up with the blog.  We’ve been writing Second Hand Roses now for over ten years and our WordPress plan is a free one.  We’re coming up against the 3 gig picture storage limit.  We can try to restart the blog and link them together, maybe, and hopefully all the old posts well still be available.  Another solution is to stop writing when we hit the limit, but we don’t want to do that.  The last idea we had was to buy a plan that allows for unlimited pictures, embedded video, and other upgrades.  The plan costs about $7 a month or $84 per year which is more than we feel comfortable spending.  This is where you all come in; we are asking for donations.  It doesn’t have to be all of it; we would be grateful for any help.  Here is a link to our Paypal account for donations.  We just want enough for this expense; if we get more, we can save it for next year so we don’t have to do this again for a while.  We’ll keep you all up to date on how things go.

So now on to our regular business—snark!

We think this might be some decor for a wedding shower or bachelorette party: 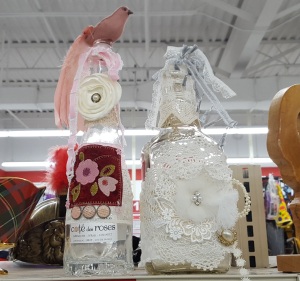 Well, as usual, the bride has her part covered, but if that’s the bridesmaid dress then I’m out!  Now that I have taken another gander, both bottles are dressed to kill—all good taste, that is.  My favorite part is the bird on top of the left bottle; absolutely hilarious!  If that is an example of the decoration, this might have been a killer party.

Where did these wooden (?) decorative thingies come from? 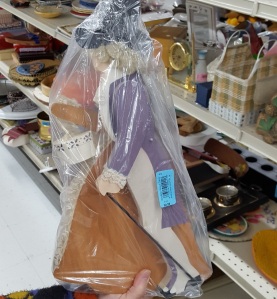 I’m not sure that this type of decoration was ever really a popular thing, and these two examples are evidence for the prosecution.  I guess that they kind of resemble those Amish pictures without faces, but these are hardly “plain people” with all the lace and fripperies on the hats.  Without a decorative purpose, they look like kindling to me.  At least you could get some sort of use from them!

I should have taken a picture of this front on, but I was worried about my camera: 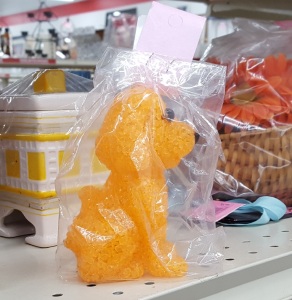 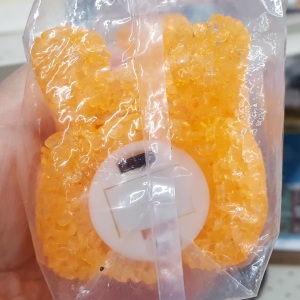 It’s one of those plastic pellet figures that is trying to look like a neon yellow dog.  Not great, but you only say that because there are no batteries in it to show how this canine could go from bad to horrendous with the flick of a switch!  I’m not sure anyone could even look at it with the naked eye while it was activated.  That’s a whole ’nother level of radioactive that most of us don’t want in our houses.  Instead of inflicting it on perfectly innocent thrift store shoppers, this light could be stopping crime in alleys, or keeping ships safe along treacherous shorelines.

We frequently whine about how shells are abused for fun and profit:

How is this even considered attractive enough to sell as jewelry?  The shell is pretty blah to begin with, and the chicken wire bondage used to create a bezel is not doing it any favors, either.  It’s a pretty big thing to have bouncing around on your chest all day since it isn’t adding to your look unless you’re a mermaid.  But wait, there’s another one:

Well, in its favor, it actually is a pretty pink color, and it’s small, yay!  They call these shells “high spired” and they belong to various sea snails.  On the other hand, instead of using a regular bead cap to hang it, the maker looks to have taken part of a bullet casing and wired/glued it in place with a mess of grey wire looped to make the bezel.  I would almost give this a pass if only they had used any kind of bead cap with the appropriately colored wire.  As is, I have to say a big ol’ “Nope, nopity, nope!”

Uh, that came out wrong!  Should have said, people take the game of cornhole very seriously—just look at that trophy!  I didn’t know that Hulk was a competitor, although he looks kind of mad about winning which isn’t a good thing.

I was thrilled to find this box at Who Gives a Scrap: 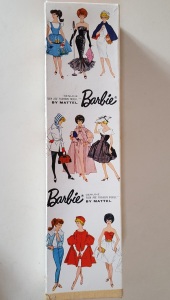 It’s kind of puzzling that it was at a secondhand craft supply store, but maybe Mom kept buttons, zippers, or some other sewing supplies in it.  I really wished that the original redheaded bubble cut was still in there, but hey for $1, I’m not complaining.  I only have a Midge box and a reproduction box, so it’s great to have an old Barbie one, too. ( Kathy here, and I don’t have any, but Deb saw it first! )

I bought a couple of things at an estate sale last week.  The first thing shouldn’t shock anyone since I’m a big fan of vintage Asian art:

This obi is gorgeous brocade with a crane and fans design.  It’s 12 feet long, about a foot wide, and weighs a ton.  I can’t imagine having that wound around your middle!  We’re being just a bit hypocritical, but we’re going to split it in half and use our pieces as runners.  Neither of us could display something this big, otherwise.

I have always thought these little Storybook dolls were cute, but have never bought an older one before:

I’m pretty sure she is a Nancy Ann because she’s bisque, has black painted shoes, a mohair wig, the right kind of face paint, and her little dress is tied in the back with a ribbon which was common in the 1940s.  I’m not going down a rabbit hole and start a new doll collection, although I have a few other Nancy Ann rescues in my collection.  I just thought she was adorable!

Well, I’ve rambled on for long enough, so it’s goodbye from NoCO and we’ll talk at you next week.