Well, our Thanksgiving is a little later this year so I think with a little coaxing we can get TWO posts for your reading pleasure!  Plus, we have a giveaway which I’m going to start with since it makes us so happy!

Way back in 2013, I found an ad for a cranberry server in an old Better Homes and Gardens which started our quest for cranberry servers.  I copied it so you won’t have to go looking for it:

I bought a whole pile of Better Homes and Gardens magazines from the 1940s at a garage sale.  They have tons of really interesting ads:

Wow, I never knew that you shouldn’t serve cranberry slices with a regular spoon.  I don’t think I have ever seen one of these servers, but if we meet up at an estate sale, at least I’ll know what it is!  By the way, did you see the article to the left of the cranberry server?  It explains some of my cooking woes; my pans are agin me!

Readers were amazed with us; lots of them didn’t know what that flat round thing was for.  We had requests from folks to find a server for them and we did find an extra one which we gave away.  Well, we have another one and hopefully we want someone to get it before U.S. Thanksgiving: 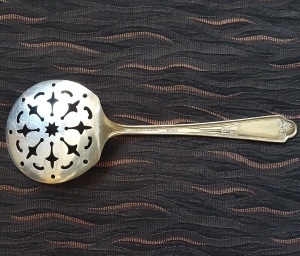 It’s even the same server as in the ad—what are the odds?  You know the drill: leave a comment here, on Facebook, or on whatever board you read this blog on, and we’ll have a drawing next Friday (11/22/19) around 7pm MT, and I’ll get the server in the mail on Saturday.  Hopefully, the lucky winner will have it in time to use it Thursday!  Kathy even polished it up and it’s been living in a Ziploc bag, so no tarnish to clean.  If you don’t live in the U.S., but would like the server for whatever reason (we know jellied cranberries aren’t a thing anywhere but here, and only on Thanksgiving here) then feel free to enter.

I’m not so excited about the rest of the things I have to show you, and you shouldn’t be, either.

This is a terrible picture, but those dang plastic bags really tax my pathetic skills:

If we’re to believe this cutout, we’re seeing the equivalent of a Pilgrim Cinderella or Snow White.  The birds are helping him gather fruit for the first Thanksgiving feast.  I hope he is singing a song with them, too!  Forgive my cynicism, but I think the poor little bird needs those grapes more than the Pilgrims did.

I was looking up the word Pilgrim because I was wondering if it should be capitalized, and found this definition at Merriam-Webster:  one who journeys in foreign lands.  It was the first definition, so in a sense anyone who travels is a pilgrim—you don’t need a buckled hat and shoes.

This is an official WTF decoration: 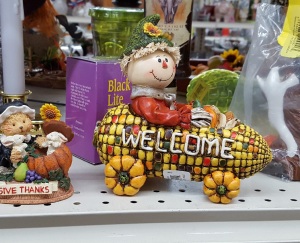 Okay, I know that scarecrows can sing and dance; I’ve watched The Wizard of Oz enough times over the years.  When did they start driving Indian corn vehicles with pumpkin tires?  Just like H.R. Puffstuf and The Banana Splits, I think this was inspired by some bad LSD.

I called these two The Molasses Pilgrims: 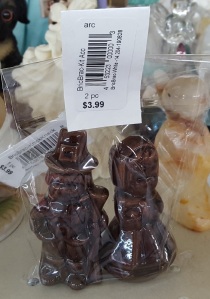 I think that dark brown glaze is just perfect for bean pots, and I don’t even mind the dripware version with the lighter bands for a few pottery things.  Why would you want to use it on a pair of salt and peppers?  It isn’t particularly attractive, I’m not getting any yummy beans, and you really can’t pick up any details of the Pilgrim figures.  They might as well be pillars of salt and pepper for all we can tell.

Well, just in time for Thanksgiving:

Just what everyone has been clamoring for, solar dancing Pilgrims, or the more sophisticated sounding, solaires.  This is just a really mean idea since in most northern states, at least the ones I lived in, there won’t be any sunshine on Thankgsving Day, in fact you might not really see the sun again until Groundhog Day, if you’re lucky.  So, unless you have your Pilgrim solaires under your SAD lights, they won’t be doing much dancing!

This craft project fits right into the what were they thinking portion of the post:

Yeah, some people should never try to paint freehand, or arrange flowers.  I say this with the full knowledge that I’m one of those people.  I think that this is a waste of a wooden spoon and a perfectly good empty tin can.  They both could be put to much better use stirring some yummy soup and being recycled, respectively.

Just because I’m a masochist, I went looking for Thanksgiving wooden spoon crafts. Because I’m a sadist, I’m showing one to you:

You know, I’ve finally found something to be really thankful for—never having seen this project in real life.  I’m almost fond of the turkey spoon now.

Although, in my picture it seems like he is wagging his tail since it looks lopsided.  I’m sure it’s the angle, but unless you take the candle out, there’s no way to be sure.  I think that the best thing about this turkey is the candle.  It looks like one of those nice bayberry candles that smell good when lit, but don’t make you hungry like pumpkin pie scented candles.  (Except you, Kathy, who doesn’t like pumpkin pie, which is practically unAmerican!  😉) 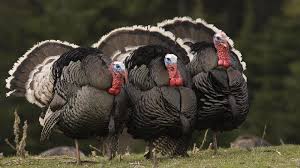 At least this picture explains that bump on the chest of our pottery turkey above.  Real turkeys have some weird cowlick feather thing going on in front, and when anyone makes a decorative turkey, they just HAVE to add that in for realism.  Unless you really know what you’re doing, it would be better just to ignore that chest bump.  Their beaks are different from duck’s beaks, too, but you couldn’t prove it from all the ceramic turkeys we see.

Well, daylight is burning, so I had better just stop and leave Kathy some pictures for next week.  Please enter the drawing if you would like your very own vintage silver-plated cranberry server.  We want to spread the Thanksgiving joy.