Gulp, we are going to end up dating ourselves rather badly during this post, as both Deb and I came of age in the ’70s, so yeah, we are crazy old ladies.  What are you going to do about it?  Actually, if you are ever in our area, and want to go shopping with a couple of crazy old bats, and have a tough leather skin for folks following you around and laughing, hey, look us up!  No really, you would be surprised at how many snickers we hear going on around us, at some of our comments.  We must be hysterical!  But, just look at the material we have!

We had an entire conversation with multiple people at the estate sale where we spotted this beauty.  It was made of some sort of fiberglass with splats of green and blue plastic stuck on it.  There was a lady interested in buying it for her daughter-in-law, but she had to see if it worked.  There were several tense moments while myriad extension cords were traced back to outlets, and then “viola!” Nothing happened.  She refused to buy it at the $55.00 price tag, as it “didn’t work”  My comments about changing the “blinkin” light bulb, fell on deaf ears.  Even if there was something more drastic wrong, it could be fixed in less than half an hour.  Sheesh, folks are so helpless.  Don’t be one of those!

To go with your nonworking lamp, how about this groovy chip and dip? 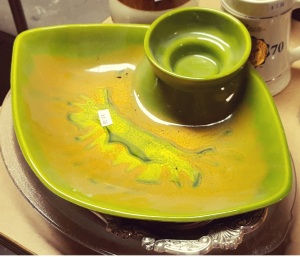 If you weren’t sick before you ate all those chips, you sure would be when you got all the way down to the bottom and spotted that bilious color green.  My dad would have loved this in the ’70s as there was way too much green in my childhood home.  I have scars.

On the other hand, I was much more into this:

I would claim this was for a swingin’ bachelor pad, but it is way too “early American” for that, so let’s just say this is what went into the living room to play Dad’s old Montivani records.  At least until the teens came in and loaded it up with Queen and the Bee Gees.

Here is a little bit better view of the innards: 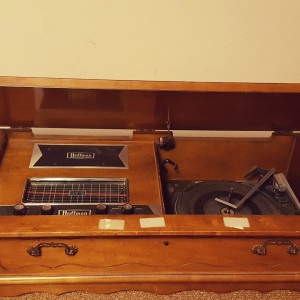 When Dad had finally had enough, he must have sent the kids to the basement, where they continued to rebel:

We were not sure what was happening here, but Keith Haring, they were not.  Honestly, I might have paid more attention to the decorated walls, but I was busy snapping up a lovely contemporary bronze sculpture for $10.  When I got it upstairs to the gals running the estate sale, I noticed a different sculpture on the table that they were carefully saving, as they thought it might be worth more.  I quietly spent my $10 and snuck out the door.  We are much more kind to individuals making those kinds of mistakes, and might have given them a clue and a bit more money, but if you tout yourself as an estate company, you had better do your homework, or get out of the business.

We bet these pillows might have lived in the same living room as the Hi-Fi:

Actually, they didn’t, but surely they had some just like it?  Nothing like a pissed-off owl, and some mushrooms, at least I think that is what they are, and aren’t most butterflies furry?  Oh wait, it must be a moth.  And no, we are not even going to comment on the hideous couch they are resting on.  This couch was the worst, as it didn’t even have the excuse of being comfortable.  The only way to relax on it was to lay down, and even then it wasn’t great.  Especially with the whole family trying to use the couch, which wouldn’t work at all!

We know these are ugly, but if you opened them and used them, they would go away:

Actually, we both have to admit, we kinda liked them. There it is, you can take the girls out of the ’70s, but you can’t take the ’70s out of the girls.  These were still completely sealed.  Were they saving them for “good”?  Or did they never have an occasion so casual that it called for them?  Maybe they were waiting till they got their complete set of avocado green dishes to really set them off.

They could have used them for a patio party and then worn this hat: 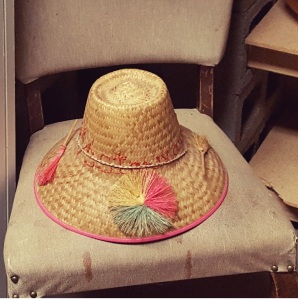 We’ve seen lots of these tourist hats over the years, but this is the first time I have ever noticed one with brooms on it.  Is that for when your everyday witch goes to the beach?  Then she is never without a broom.  Personally, if I was going to hex the whole world by cursing them with your basic “beach body”, I don’t think I would want to advertise my wicked powers.

These last two don’t fall into the right decade, but they were too good to pass up.  We both adored this:

I know it doesn’t look like much, but carefully fold open the top:

And here is your complete bar!  Here is a better look at the contents:

It was missing two of the highball glasses, but the ice bucket, cordials, shaker, and tall glasses were all still there.  This beauty dates to the ’40s and at $350 seemed like a reasonable deal.  Alas, I have a built-in bar, and Deb has a bar already set up.  Plus, neither of us could figure out a square inch to squeeze this in, or one of us would have been making the other one help load it into the truck, that we would have had to go home and get.

We both DID NOT adore this: 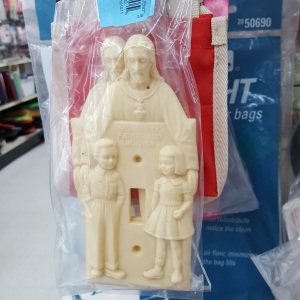 There were two of them, so both your children could be damaged for life. Did they never figure out just where that switch came out?  It probably glows in the dark, too.  We know Jesus loves the little children, but they just might want to rethink this!  Sorry, once you see that, you just can’t unsee it!

Don’t seem to be many estate sales this week, so we may have to play, I mean, shop the thrift stores!  No matter, you know we will have fun and entertain the masses!