We Find Sea Shells At The Thrift Store

We are so close to Fall, I can ALMOST feel it.  They say we are supposed to get cooler weather soon, but I will believe it when I feel it.  For now, we are still watering the lawn, and mowing, and weeding, and dead heading and … the work of a gardener is never done.  For a couple of months now, I have been having to work on Fridays which has really put a crimp in our Friday lifestyle, but with a bit of finagling, I got them to change my schedule, so we are back in business.  Our favorite restaurant will be happy to see us there on the correct day, and we will be more sensible and only shop A LOT on one day.

We are also starting to get close to my other favorite time of the year, Halloween.  You know it is nearby when random hair starts showing up on the shelves

We liked the artful arrangement in the basket, but we had a mad desire to stick on a pair of large googly eyes.  Heck, even one would have made it more fun.  Alas, we had none in our pockets, so the purple toupee had to just lay there.

I like red, white, and blue things, and I am just as patriotic as the average American, although it has been a bit harder to toot that American horn recently, but I draw a hard line here:

It’s not even cute.  They just stood back and started throwing stars (Chinese throwing stars?) and stripes at it.  It was made of nasty material, weighed a ton, and had no visually redeeming features.  The triple threat.  Three strikes and you are out, as this was; and tossed to Goodwill.  We can’t figure what misguided soul thought this was good enough for the store front and didn’t send it straight to the bins in back, but save it they did.  Probably just so we could share it with you.  Aren’t you lucky? (I know there will be at least one person who loves this, so I apologize in advance.)

Now if you want to celebrate America, you could do way worse than this little cutie: 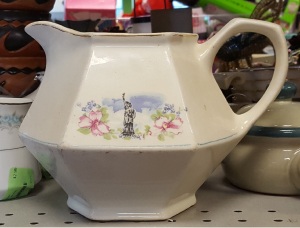 Isn’t that a sweet little pattern with Lady Liberty in the middle?  We think the pitcher had some age to it.  The mark looks old: 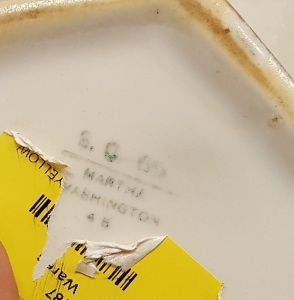 I was unable to find out anything about the company, as what I mostly found were sites with pottery with Martha Washington ON them, but I wouldn’t be the least surprised if this commemorated the statue’s arrival in 1886, or it could be a slightly later souvenir, but it sure is a pretty one.

Wow, did this tray make us dizzy:

Honest, it’s mostly flat, but wow does it draw you in.  It seemed like a really odd concoction with the romantic period flower still life in the middle and the Trompe l’oeil border.  I think it was a graphic designer who had a bit too much happy weed the weekend before, and was still a bit under the influence on Monday morning.  Wonder what his boss said on Friday?  Probably “What the heck, let’s go for it.” as here it is!

Now here we have yet another case of tortured owls:

I know owls are pretty flexible, but don’t you think the one on the right might be suffering from a broken neck?  And the other one has had an eye gouged out, so the two of them are having to prop each other up, just to stay on the branch.  On top of that, the whole thing was made from some sort of disgusting wax-like substance.  We made the mistake of touching it.  Ewwww.  I am pretty sure that it wasn’t all candle, which was too bad, as both owls might enjoy leaving this world in a glorious pyre.  They sure don’t look like they are having any fun in their current state.

Let’s finish up with the theme of this week’s post title.  How about this clock:

Something seems a bit fishy here.  Honestly, were they trying to give it a touch of glamour with that glass cover?  It really didn’t hit the mark.  Although, I guess they didn’t make it any worse, as that would be an impossibility.  I hope it kept great time, or there would be no excuse for it at all.

For some reason these all showed up with a week or so of each other.  Let’s start here:

Fairly safe.  Maybe a reminder of a particularly good oyster stew, or maybe not:

That’s what you get for being too curious and turning it over!  The photo makes it look better than it really was.  Seems like a waste of good beads.  Make some earrings, folks, and let the seashells lie, but did they?  Noooooo:

An absolutely gorgeous conch shell ruined by a plastic lobster.  Now I don’t have a thing against that lobster, except where he is perched.  Slap a pin on the back and put him on my lapel, and I would be all over it.  Would someone also please explain why it is pronounced “conk” and not “conch” like it is spelled?  Though an avid reader, I didn’t know how it was pronounced till I was in my 20s.  Still have to think about it!

OK, can you believe there is one more:

The worst of the lot.  At least the other ones tried to be artistic.  Yarn coiled up in a red blob on a shell says absolutely nothing of any value what-so-ever, except that maybe all your taste is in your mouth!  We decided that we should try and give these the benefit of the doubt and assume that they were done by a child. Yep, that’s our story and we are sticking to it; we were not at all mean for at least three minutes at the store.

Just a reminder about our hanky giveaway: you must comment by 9 pm tonight here, on Facebook, or on the boards you read to be entered into the drawing.  Here is a link to last week’s post as a reminder—it’s at the end.

We will announce the winners next week, and be back with more fun and games.

2 Responses to We Find Sea Shells At The Thrift Store