Bling Is Our Thing

I was thinking just the other day that we don’t post a lot about jewelry and wondering why.  Then it hit me—we almost never think jewelry is weird!  And if we do, well, then we are just as likely to buy it as not.  We both have literally hundreds of pieces of jewelry.  I am on my second jewelry armoire, and Deb is just in denial and refuses to give in.  We actually met and bonded when Deb started coming into my antique store and talking about jewelry.  I knew that if I had a weird wacky piece, especially if it moved, she was my customer for it.  Check out this past post for things that move.  I have purchased several odd pieces recently, so we decided to pair those up with a few finds we haven’t posted, and what do you know, a whole post’s worth!

First up, one I passed on, reluctantly:

This was so darn goofy with the chains and pompoms that I really wanted it.  No, I would probably never wear it, but I would have enjoyed owning it.  I only passed on it because the next thing I found on the rack was this crazy fellow:

Overall, he really doesn’t look that odd.  He is sterling, although the mark is unreadable, and enamel, but if you look at the back, the tail is hinged.  Here is a look at the back: 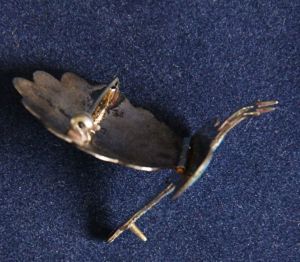 I really don’t know what it is supposed to do, as when the pin is being worn, the hinge would just flatten out.  The only thing I can think if, is that he will sit up, so you could use him as a display.  It’s still rather odd: 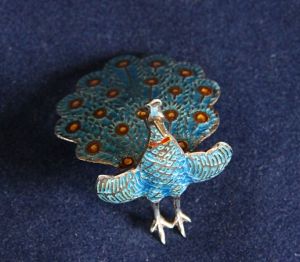 He is only about an inch and a half tall, so not much of a statement sitting on a table, or on your lapel.  I adore enameled stuff, so home it came, even at $7.99, and leaving the pompoms on the rack.  Gotta appease the hubby somehow.

While we are looking at enamel birds, here is another:

As a child growing up in the late ’60s and early ’70s my grandmother made sure I had a subscription to Ranger Rick magazine.  It was (and still is) a great kids magazine with lots of really well written stuff on animals.  One of my favorite things in it were the great illustrations by Charlie Harper, so this pin was instantly recognizable.  I snapped it up for the grand price of a quarter.  It was done by him, as it is signed, but I guess there were not many made, as I was unable to find any others.  I love it, and have already worn it several times.  If you are not familiar with his work, check it out.  Awesome graphic design.

The same sale also yielded the little blue enamel kitty in this photo:

It’s modern, but I love the look on his face.  The one in the middle is from Mexico, and was made in a very specific shop, as I was able to find pix of several others in the same style.  No signature, but the artist had a thing for cats.  This one is brass, sterling and turquoise.  The small gold one with the tiny hat is just cheap aluminum but I was going through some of my stuff and found him.  He needed an eye and a pin back, but an easy fix, so he is ready to meet the world again.  My piles of jewels may only be matched by the piles of stuff I have to be repaired and to do repairs.  Some day, when I go, there is going to be one lucky person who gets all this crap!  LOL!

This one we didn’t buy, as it was about as weird as it comes:

Well, it’s hand made, says so, and made in Poland at that:

We couldn’t figure out why you would want a pin with a guy getting ready to fall off a roof.  I am sure there is some wild folk tale to account for the whole thing, but my hubby is Polish, and he can’t figure it out, so it is probably very local.  On top of that, it really isn’t very pretty.

Deb was more nonplussed by this than I was.  Probably because I am pretty sure my grandmother had several of these, as she liked bug pins.  (Lucky me, I have all her bugs now and plenty more to add to them.  Did I mention I like bugs?)  I think the ones I have are much nicer, as they did a better job making these earlier on.  More tourist stuff, but better than some things we have seen, plus at least it doesn’t take up a whole lot of space, and you don’t have to leave it out where the giver can see it.  Hide it in the corner of the jewel box, and no one need ever know.  [Deb here.  It really bothers me that the stripes or grooves in the wings aren’t symmetrical!]

Here is a couple more I had to have:

The frog, because I like frogs.  They sort of go with the bugs.  Personally I like a whole lot of things in jewelry that I would NEVER deal with in real life.  Make me a bracelet in the shape of a snake, and I am all over it.  Keep those real ones for yourself.  The mouse I had to pick up, just because it was a pretty odd mouse, and it has that ’70s style to it.  Both of these are a couple inches tall, so you can’t ignore them, but who would want to?

And lastly this GIANT goose pin: 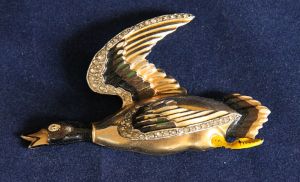 Probably ’40s, somewhere on either side of the war, as metal was all used for the war effort, and there was not much made into jewelry.  This pin is monumental at over 3 ½” long.  These huge things were made to be worn on coats, and this one has a nice 3-D aspect to it.  Take a look at it from the side: 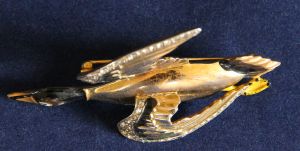 You can see how the bottom wing sticks out.  It’s a great piece, for something that was really inexpensive costume jewelry.  They took the time to design nice things.

If you collect a certain type of jewelry, why not share it with us?  We love hearing about collections, and would love to share them with our readers!  Maybe we will try and highlight some more fun stuff from our collections as we go along, if our loyal readers enjoy this sort of post.  Let us know.

2 Responses to Bling Is Our Thing