“It was a beautiful, bright autumn day …

… with air like cider and a sky so blue you could drown in it.”
Diana Gabaldon, Outlander

We’re heading into my favorite time of the year—late summer and fall.  It’s time for cooler weather, although northern CO didn’t get the memo since it was 100º last weekend, fresh produce from the garden should be pouring in, and hopefully all those big summer projects are done.  It was a mixed bag in my yard this year; for some reason my veggie garden didn’t do much, but the flowers were great!  It’s the best thing about being a gardener—there’s always next year!  We are the eternal optimists.  Both Kathy and I like to garden and trade plants and tips back and forth.  Our friendship is not totally based on thrift stores and garage sales.  😉

We have been meaning to point you all in the direction of Christine McConnell, if you haven’t heard of her before.  She had a Netflix show last year, which was weird and wonderful, but ended up getting canceled.  Now she has a YouTube channel which has even more of her Charles Addams meets Martha Stewart vibe.  If you like peculiar, macabre, and unique projects, you should give her a look.  Her creativity is off the charts!

In my post a couple of weeks ago, I mentioned that we were looking for another cranberry server to give away this Thanksgiving: 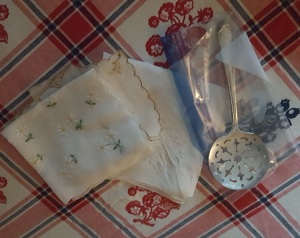 Kathy reminded me to look in the basket where I keep the goodies that we will be giving away on the blog.  Who snuck that cranberry server in there?  Honestly, I’m getting wiftier by the day.  Good thing Kathy can remember things for more than a minute!  As you can see, there are some darling hankies that need a new home, too.  Stay tuned.

It’s early in the post, but I feel like it’s a good time to endorse this thought: 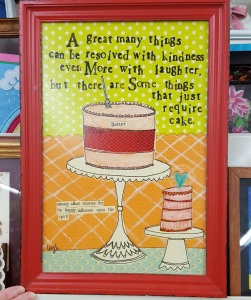 Almost everything can be fixed by a scrumptious treat, so this works for us.  What’s not to like about kindness, laughter, and cake?  Although, a good stiff gin and tonic has also been known to smooth out life’s little wrinkles.  Life is NOT one size fits all!

I’m not sure how well this hot pad would protect your hand:

But, if you have an old towel that you would like to reuse, this idea could work as a trivet.  I’m pretty sure that the crocheted trim could have been attached with a little more finesse.  Even just using white thread would have been a step in the right direction.  I’ll probably keep cutting up my old towels for rags, but it’s always good to have options.

We feel like there should be a story to go along with this guest towel:

You could add a postscript saying, “Don’t ask me how I know!”  Using that little towel after a bath would be like trying to dry off with a paper towel—a funny story later on, but in the moment, an exercise in futility.

What the hell is this?

We were strolling down the aisle at our favorite craft recycling place, Who Gives a Scrap, when we saw this on the shelf.  I just can’t see anything but that nose and maybe the dead cat on his head!  A couple of questions: why would you make this in the first place, and after you did make it, why wouldn’t you burn it?  It’s just so awful and keeps making me think of inappropriate anatomical comparisons.  It did the impossible; we just stood there staring at it with our mouths open catching flies and no snark to be heard.

I should have saved the cake picture for this spot, but how about a beautiful wicker chair instead? 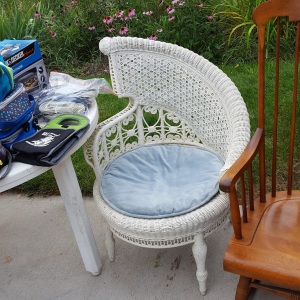 It was so pretty.  Even now, I wish I had bought it, but there is no place for another chair in my house.  I just love everything about it—especially the curved back.  I told myself to take a picture and move on.  We’re not good at that, but there is a limit on what you can have without a storage unit.  I want to see all my lovely things every day all around me.  If that isn’t possible, then I don’t need it.  Wash, rinse, repeat.

We aren’t sure what they’re smokin’ at the local thrift store: 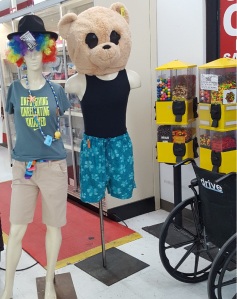 They have the strangest displays, sometimes.  That bear head with the unblinking eyes is pretty disturbing.  I’m not sure why they’re worried about the head when the mannequin doesn’t have arms or legs, either.  Maybe they were gearing up for the Tour de Fat (sorry about all the ads in the link, but the pics are great!) crowd looking for costumes to wear on their bicycles.  This bear head would fit right in, and nowhere near the strangest costume to be seen.

I’m not sure why we like this picture, but it did make us laugh:

We both commented that it was a good alternative to the bad landscape pictures that people adorn with monsters.  These two odd silhouettes are sort of sweet, and appear to be enjoying the scene, not stomping around destroying stuff.

These next things may be the most useless tripe we have seen in a while and that’s saying something:

This is a fake brown paper bag made of plaster and filled up with mussels or maybe clams.  What the what!!!  How is this even a thing?  Why did someone go to the trouble to haul it to a thrift store?  I guess you could ask that question about lots of stuff we see, but this is particularly bad.  Absolutely useless because it’s not even attractive, as realistic as it appears!

This isn’t much better:

News flash, we aren’t crazy about clowns, or any of their associated brethren like harlequins and jesters.  When I look at this little doll that some nice grandma made, I just think that the netting or tulle could have been better used to make scrubbies for dishes and cleaning, or petticoats for your square-dancing dress.  This little doll is waaaayyyy down the list of useful things.

I’m not exactly sure when we’ll have the hanky drawing, but we should do it before the end of September.  Hankies are so handy to have during the cold and flu season; you look way more elegant pulling one of these babies out of your purse or pocket instead of a crumpled Kleenex.

2 Responses to “It was a beautiful, bright autumn day …