A Jumble of Junk

We went to yet another fabulous estate sale last week, but we need to get some photos taken of all our “treasures” and then we will share.  We have been just inundated with sales, as one of the companies here in town has been averaging one a week.  If we are exhausted going to them, imagine how tired they are setting them up and having them?  Crazy people.  For this week, I have some random stuff that has not made the cut on previous weeks and is too good/bad to not share somehow.

Here is one from an estate sale a few weeks back:

I’ve got to say that striped sun hat was HUGE.  There is not a chance in hell of even the tiniest ray of sunshine falling on your lily-white skin with that on.  Of course, seeing where you are going is a slight problem, but hey, no sun cancer in your future.  We actually thought it was rather cute, just a little on the large size.  Imagine getting caught in the rain and having it go limp!

While we are at the beach, we have yet another entry into our parade of shell art:

We have a love/hate relationship with this one.  On the one hand, seahorses are cool, on the other, still seems like a waste of shells.  Not to mention it looks like a rather odd seahorse, but what can you say about a seashell seahorse that was sold down by the seashore?

We also can’t decide what to say about this, other than yuck:

This Pepto-pink bear seems to have been dipping his nose into the orange paint for no discernible reason, and it hasn’t improved his looks one iota.  Judging from the background, this was taken at an estate sale, and I really can’t remember what his original use was.  Probably just to sit around and make every other plastic bear in the known universe look his absolute best.

I know some of this sort of tableware is very collectible, but our general reaction matched the odd onion with the red hat in front.  It just made us scowl.  To top it off, some of it was actually quite modern, so it didn’t even have the excuse of being vintage for its crazy look.  I don’t know why something being old gives it a pass in my book.  Probably something like respecting your elders, plus once you start getting up there yourself, you start looking for any excuse for the odd aberrant behavior.  That’s our story and we are sticking to it.

At the same trip to the thrift store we spotted this sad doily:

You know how prone we are to rescuing doilies and vintage needlework.  Anything that someone worked that hard on deserves some respect, but this one is just too ugly to even care about.  You could practically have used it for a dolly afghan, it was so big, and made with big chunky yarn that gave it no charm at all.  We seriously considered lighting it on fire.  You know all that polyester yarn would go right up in flames.  We just didn’t want to have to explain it to the fire marshal, or the store manager for that matter; we might want to go to that thrift store again.  Who are we kidding—we will probably be there next week!

Deb does love her “Faces in Places”: 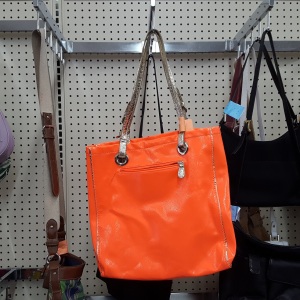 We tend to look at orange bags because Deb’s sister loves orange.  This one is kind of funny with that silver “tongue” sticking out of its mouth.  No matter how you look at it, it’s better than this bag: 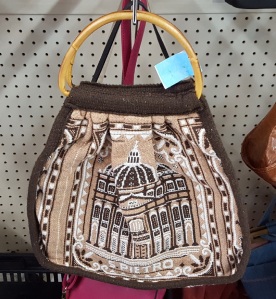 Seriously?  You stood in front of St. Peters, arguably one of the loveliest churches in the world, and then you went and bought this as a souvenir?  I stand by my recommendation to most folks to just go buy a postcard.  If someone purchased this and brought it to me as a souvenir, I wouldn’t even keep my old tatty socks in it.  Maybe I could use it as a clothespin bag, and hope the sun and rain would render it obsolete in record time.

We were on the fence about these too:

While we applaud any way to learn about history, this Corps of Discovery crew looks like a bunch of rejects from the Muppets.  Probably some poor suffering child, who really wanted a Barbie or a Lego set, got these “educational” toys for Christmas and promptly hid them under the bed, never to be seen again till going off to college and Mom cleaned the room.  On the bright side, they are in perfect condition to give to the next poor sap, I mean bright tot.

Last time we hit up our favorite Creative Re-Use store, we came across these: 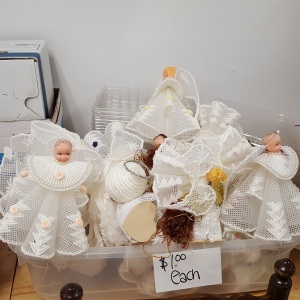 We were going to save them for Christmas, but why not torture you now?  Deb is pretty sure $1.00 each is vastly overpriced, unless they are paying you a dollar to take them away?  A box of matches might be a useful item in this instance as well. 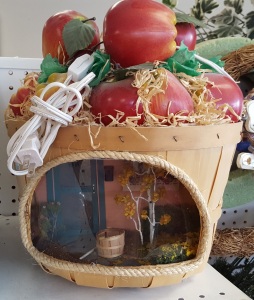 And this one too:

There is an awful lot of work that went into both of these.  The apple basket even lights up, for heaven’s sake.  We love miniatures, as you can tell from our doll fetish, but we wouldn’t touch these with a ten-foot pole.  They take up a lot of space, and neither one of them was that well done.  This is another case of wanting to like something; we just didn’t want to have to work that hard at it!

I thought after all that I should leave you with a little something to cleanse your palate: 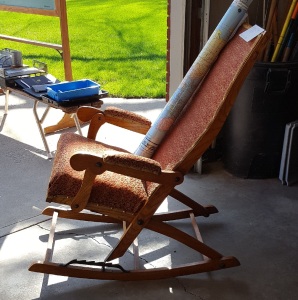 This was such a cool adjustable rocker.  Neither of us had ever seen anything quite like it before.  Kind of an early prototype La-Z-Boy, or Lazy Gal, as this piece still looks pretty feminine.  Think how much more comfy it would be to recline while rocking that teething toddler to sleep?  I have no idea why this didn’t catch on, other than it would have been up to men to make it, and they never worried about Junior’s fussiness.

Well, we will be off to more estate sales and other adventures this week, and you know we will find something to share with you, so tune in next week!  Plus, we have a really fun craft post coming up in a couple of weeks that will include some cool patterns.