I gotta say, we have been having a pretty mild winter here in Colorado.  Apologies to the rest of the country suffering through the polar vortex, the snow in Seattle, the snow and wind in Hawaii, and the general craziness of a wacky winter.  For once (knock on wood) we are taking it easy.  Maybe a little light on the moisture, but hey, it’s what we always complain about in Colorado this time of year.  Even with the better weather, we have still been pretty short on garage sales, and the estate sales are just starting up again after the holidays, so we have been relying pretty heavily on the thrift stores.  So, come and take a trip with us around the world via the thrift store.

Maybe we should start out slow, and visit our own back yard: 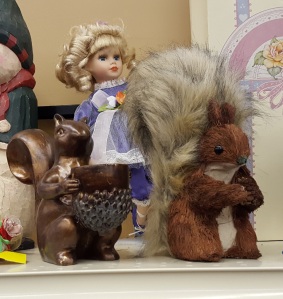 At least that is where normal squirrels are supposed to hang out, but these two critters are not very normal, are they?  I think that the one on the right is going to get into trouble with PETA for the size of that tail he is sporting.  Surely it can’t be his own appendage, but only his hairdresser knows for sure!  The one on the left is mostly harmless, although he has taken begging to a whole new level what with carrying around a big ole acorn cup.  I know the bird feeder is empty, but really?

Now how about the desert Southwest?: 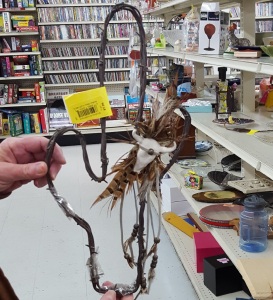 Nothing compliments an interior like barbed wire and a plastic cow skull.  I have never understood the fascination with barbed wire, although I have visited the barbed wire museum in Texas.  It was interesting, but not worthy of putting in my living room.  That being said, I would rather have a spiked cactus than this: 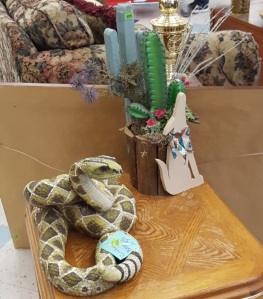 OMG what were they thinking with the snake?  Now if you wanted to keep me out of your living space forever, just let me know you own a giant snake figure, and I will leave you alone till the end of time.  Surely, that could not be the full impetus behind this?  I have it on good authority that some people like snakes, but this is going too far.

How about we set sail for adventure: 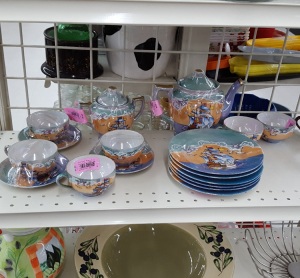 We had to take a picture of this cute little lusterware tea set, mostly because the decoration was so unusual:

Normally, they have some sort of little Oriental scene, or a cottage or something like that.  We have never seen one with a galleon on it.  We kind of liked it, but where would we put it?  That’s the age-old and eternal question in our respective homes.  We are so thankful that often just taking a picture of something stops us from buying it!

Here we have another entry in the “you made room in your suitcase for that?” category: 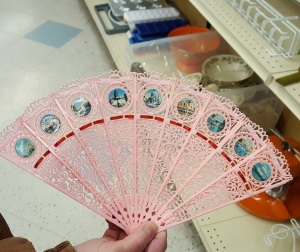 Seriously, I love Italy as much as the next person, but when visiting the mecca of design, you come home with a cheap plastic fan, made in Japan, with pictures of the Doge’s Palace on it?  Sheesh, buy a postcard.  You could fan yourself with that just as well, and no one has EVER had to explain away a postcard.

A trip to Ireland probably explains this little box:

The top swiveled on the screw to open up.  Deb loves boxes, but this was just kind a miss.  Just not good enough to bother with, but not so heinous that we it makes our worst of the worst category.  We tried to like it, honest we did, but if we have to work that hard, it might as well be a giant snake.

We are not sure where these wooden cats came from, but they should probably go back: 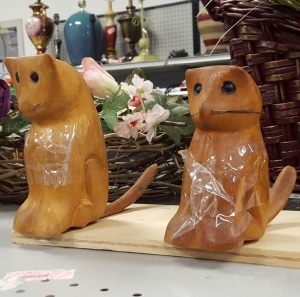 We are glad they have each other, cause no one else is going to take something that homely to live with them.  That being said, they were gone the next week.  The stores do purge the shelves, and we frequently hope that some things just get tossed on general principles, but we are probably wrong.  We also hope that the crafts-person responsible for this bit of whittling has since moved on to a less upsetting sort of pastime, like sitting in the corner twiddling their thumbs.  It would be safer that way.

You know us, we can never resist looking at dolls, no matter where they are from.  We are sorry we did: 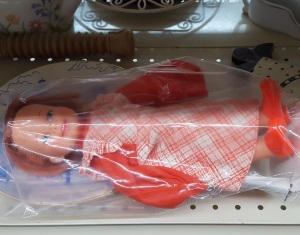 Gosh, I am just positive this ginger-haired hellion is possessed.  I wouldn’t trust her alone in a dark room, and you’d better believe she is getting nowhere near my house.  I swear that I heard sinister music playing in the background just while looking at her.  You know the kind; the tune that lets you know in no uncertain terms that the star of the movie shouldn’t do the thing they are just about to do.  You can yell at the screen till you are blue in the face and they never listen.

To make up for that, here is this charming lady:

We wondered what her original outfit looked like, but we are giving full marks to the mom or grandma who made the groovy ’60s togs.  They were so well made.  It’s a good thing they were not Barbie sized, or we would have been plunking down hard-earned cash to get Babs some new threads.  We didn’t get the doll out of the case, either; she might have been something fabulous, but we will never know.

Let’s end up back in the kitchen, as all the best trips do.  What is traveling without food?:

Come on, you know you like it.  At least deep down inside, we all may feel the need to own a bright orange fondue pot, right?  Oh wait, there is still one in your cupboard?  I won’t tell.

I think the second pic is closer to the real color.  And no, we didn’t buy it.  We don’t mind forcing fondue pots on our readers, but we will pass.  Of course, I am pretty sure each of  us has one somewhere, in the depths of the pantry, that seemed like a good idea at the time.

While we are Seventies-ing, thought I would share this dress:

Would you be the hit of the cocktail party in this or what?  It’s a pretty fabulous dress, and it sure needs a good home.  Take a look at it in my Etsy shop, if you think it needs to live with you!  Both Deb and I have shops, so don’t forget to check them out now and then to see if something we loved made the cut!  We will feature an item from Deb’s place next week.  Till then, keep thrifting and traveling—just skip the plastic fans.