I’m not going to complain about the weather, although we seem to give up on garage sales earlier if it’s over 90 °F.  The glare from the hot, hot sun makes even our snark go away.  Thank goodness we’ve had a bunch of estate sales in the last couple of weeks.  They are usually inside, and we’ll take all the shade we can get, even if it’s hot.

Recently, I’ve seen a couple of funny memes about the heat.  I’ll let you pick out your favorite: 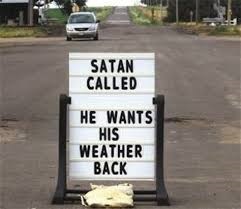 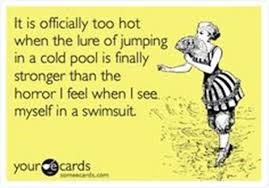 This next little grouping brought back some bad memories.  I don’t play bridge, ever: 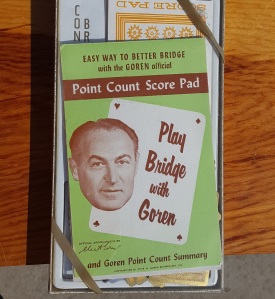 It’s not that no one has tried to teach me, but rather that it’s a serious game, and way too much work to be fun.  When the yelling starts, I’m out!  Goren here looks like he might be a hypnotist, which is what it would take to make me play bridge again.

This set of little chairs were in the basement at an estate sale: 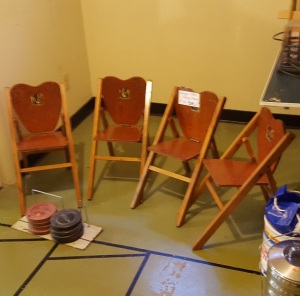 Sorry for the blurry picture.  It was kind of dark, and there were people to dodge.  It doesn’t take much to mess up my picture game.  They had those cute vintage decals on their little heart-shaped backs.  Totally adorable.  The other cool thing about that basement was the shuffleboard court painted on the floor.  The discs are sitting right in front of the leftmost chair.

I couldn’t think of a justification to  buy this high chair, but I sure wanted to! 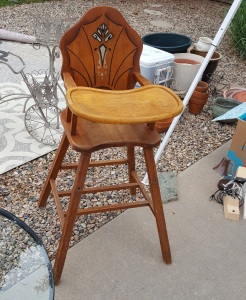 The fact that my house has no babies, no baby dolls, and no room weighed in on one side of the scale against the Art Deco awesomeness of the chair.  Sanity won, and I left it there for someone else.  I could have used it for a plant stand; good thing for my budget that idea didn’t occur to me until now. 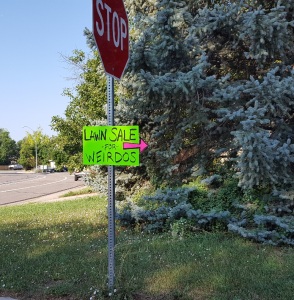 The sign was the weirdest thing about the sale.  First off, it was on the driveway, so it wasn’t a lawn sale.  Secondly, the stuff looked pretty normal to us.  But, the sign did its job because we were sucked into the sale.

We saw this little diorama in the yard next to a sale: 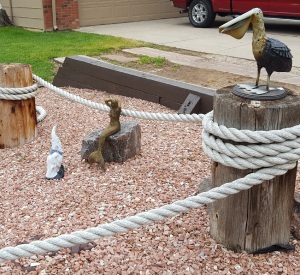 It’s really hard to say what’s going on here.  Everything looks so nautical, except for the zombie garden gnome.  And, what the heck is an ocean scene doing in a landlocked high-plains desert like Northern Colorado?  Someone is a long way from home and misses the ocean!

Here’s a Pinterest craft project if I’ve ever seen one: 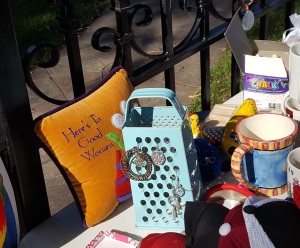 You know, if you only have a couple of pairs of earrings, a small box would work, and you can leave Mom’s cheese grater alone!  What did it ever do to you?

This was at the same sale:

I’m not sure what these two things say about the family, but they are pretty strange items.  Why on earth would you want fabric donuts?  It was a couple of feet long, and someone obviously put a lot of work into recreating a baker’s dozen of donuts.  These are even worse than candle donuts, because candles might at least smell good.  Fabric donuts would only make me cranky every time I saw them!  Maybe this would make a good cat bed; you could put some catnip inside the donuts, and then watch the fun.  On the other hand, these people were selling their music CDs for 10¢ each.  That was fun!

We’re just hoping that this quilt is one of those everybody-embroiders-a-block things: 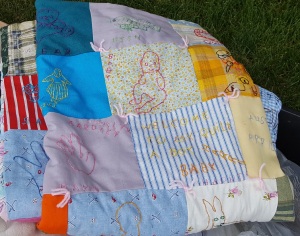 Because if the maker was that bad at embroidery, why the heck did they put their lack of skill on display with the quilt?  That baby block in the middle center is so shuddersome that it totally squinks me out.  There are also a couple of animals here that could be a dog, cat, rabbit, squirrel, you name it.  I’m pretty sure this isn’t going to sell, or if it does, it is going to be a trunk blanket for your car.  Although, I would put the back side up; who wants to picnic looking at that baby?

We did make it to a thrift store: 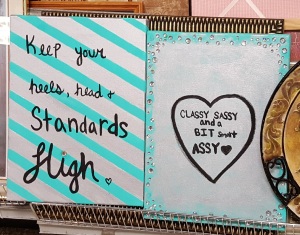 Obviously, these belonged to the same person.  I’m sure it’s good advice, but unless you’re one of those coordinated people, it’s hard to keep your head up and your heels high at the same time.  We’re totally down with the rightmost sign.  We love to be sassy AND smart assy!

I wanted to show you a print I got at an estate sale: 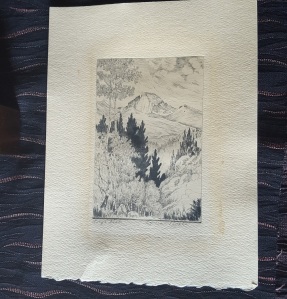 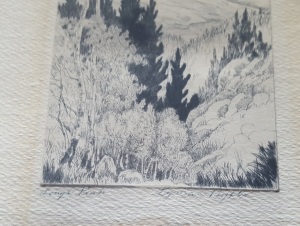 I got this at the same estate sale that Kathy got her coffeepot with the Bakelite handle that she talked about on Facebook.  The name Lyman Byxbe rang a bell, and I really love images of Longs Peak, a 14,259 foot tall mountain that I nearly got to the top of, long, long ago.  Turns out Lyman Byxbe lived in Estes Park, the small town on the east side of Rocky Mountain National Park.  He was fairly famous in his lifetime, and got national attention from a showing at the Smithsonian in 1937–38.  This print has foxing, and has yellowed from contact with regular matting and paper in the frame.  But, these prints still sell from $60–$200 each, depending on subject and condition.  I’m pleased with my $5 investment.

We’re sending cool thoughts to everyone out there sweltering with us.  It looks like we might get some thunderstorms next week, hurrah!

4 Responses to Baby, It’s Hot Outside!