The People You Meet

We actually enjoy meeting folks on our travels through junk land.  Really we do! Although there are times we are just plain pissed off at them, most of the fans of junkdom are pretty nice.  We also spend a lot of time thinking about the previous owners of things, and just who might have made these things in the first place.  This post lets us “meet” a bunch of these characters, so come with me and let’s see who we find.

I am not sure who this is really supposed to be: 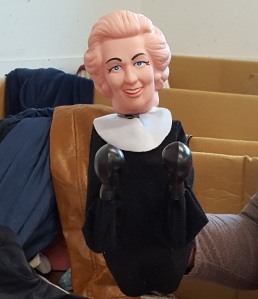 We think she looked suspiciously like Margaret Thatcher, but why anyone would have a punching, pink-haired, Iron Lady puppet here in the U.S. is beyond us.  She worked perfectly, so if you wanted to annoy everyone around you, she would be a great item to add to your collection.  [Deb here:  B.H. just found a link to an Archie McPhee page that states that they used leftover Margaret Thatcher heads to make their Punching Nun puppet.  So, we were right that she looked like M.T. but she lost her wimple somewhere.]

If you didn’t go for that puppet, how about this one?

Deb was un-amused by this, but I thought he looked like a runaway from the Muppets, so I was OK with him.  I can see him giving Statler and Waldorf a run for their money in the crankiness department.  Not sure how much fun your average child would have with him, unless he felt the need to torture his baby sister with the idea of a nasty old man living next door, but still, not the worst thing we have ever seen.

This might rank up there with some pretty bad things:

Why on earth would anyone think it is a good idea to make a “Party ’Til You Puke” game?  I am not happy with even the mildest queasiness from alcohol, or from any other cause for that matter.  Can’t think that I would want to go out and do it on purpose.  I suppose that it is a best seller around the fraternity circuit, but it really shouldn’t be.  On the other hand, compared to the game, the funny little cowboys are actually kind of cute.  A little weird, but at least they are mostly harmless.

Not so sure about this cowboy:

He actually isn’t entirely awful; we just thought the whole thing would be funnier if he were wrestling the chickens instead.  Looking at the cowboy, we were not sure who was going to come out on top.  Looks like Ol’ Slim there is losing his footing, so any second he is probably going down in a pile of “you know what”!

We decided that the Goodwill folks were having fun again, when we came around the corner and saw this: 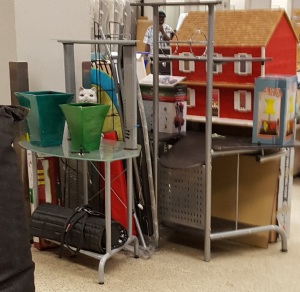 The cat statue peeking over the pot just tickled our funny bone.  For those who want to know, the doll house wasn’t much, but it would have been good bones for someone to start out with, and no, we didn’t buy it.  We don’t do 1/12th scale … thank goodness.

She was cute in an “over the top” sort of way.  The only thing we wondered about were the rhinestone nostrils.  There is such a thing as too much.  Of course, looking at all the bows and flowers,  I wonder why we drew the line at the nostrils.  I would still be pleased to drop my pennies into this little porker.

We are getting geared up to attend another doll convention next summer, and we need ’60s things to dress up in.  We found this hat: 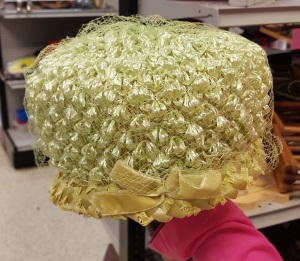 And put it right back!  It looked like an over-frosted cake had come to perch on our heads.  I know the hat is supposed to sit up high, but there is no way either of us could have pulled it off, even with a bouffant hairdo to set it off.  Oh well, still on the hunt.

I remembered I promised you a cowboy art story a couple of weeks ago, so I thought I would share this character with you: 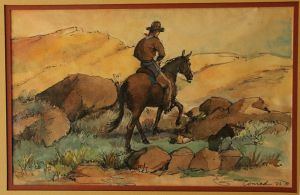 My husband picked up this lovely watercolor at a sale just around the corner from us.  We both immediately liked it, and the price was right: $1.50.  When we went to pay for it, the lady asked if we were familiar with the artist, Conrad O’Brien-ffrench.  We admitted to ignorance, and she told us a little and then told us to look him up.  Apparently, he served in WWI with distinction, as well as on other fronts.  After the first war, he was tagged for the British Secret Service, and served with Ian and Peter Fleming.  Yeah, that Ian Fleming.  Conrad’s many stories and exploits were probably much of the basis for James Bond!  He continued to serve with distinction, married a couple of times, had kids and then decided to retire in, of all places, Loveland, Colorado!  The lady who sold us the painting had been a neighbor of his, which is how she acquired the work.  Who knew that James Bond lived in Loveland?  We had the painting appraised, and it was not worth a whole lot, because of lack of auction numbers for his work, but we love it, and where else can you get a story that good?

Hope you enjoyed meeting a few people, and until next week, keep us in mind, if you have any stories of characters you meet on your travels.  We would love to hear them.

4 Responses to The People You Meet