“Snow in April is abominable,” said Anne. “Like a slap in the face when you expected a kiss.”
― L.M. Montgomery, Anne of Ingleside

Boy, am I glad that I didn’t give into the natural optimism of gardeners and plant my veggie garden.  It’s been pretty dang warm here in Colorado; while I was in Florida a couple of weeks ago, the temperature difference between the two states was about 5ºF.  This weekend we’re expecting a low of 23ºF with a better than average chance of snow.  That’s springtime weather around here; wildly varying temperatures with any kind of precipitation possible.  I have to admit to covering my fernleaf peony because it has four huge buds on it and I want to see one of them open.

On the other hand, we’ve been having overall fantastic luck with estate sales.  This post features items from an estate sale run by a local group of women; they do it for charity.  It’s a nice way to do a good deed with all the paraphernalia of a home.  We weren’t too wild about them at first because their prices were ridiculous.  I know it’s for charity, but I would rather make a donation than overpay for an item.  Lately, they seem to have seen the light and are now selling like crazy because the prices are what you expect to see at an estate sale.

I have the craziest collection of ceramic Spaghetti Poodles:

I think they’re fun and so 1950s.  I have never seen a Spaghetti Mouse before this one.  I’m not sure the little mouse has the kitschy cachet that poodles have, but I’m sure this did float someone’s boat.  Those roses on its forehead are pretty darn funny.  Many of my poodles have flowers on their foreheads too, for no apparent reason.  For $2 you can afford to have fun with this little planter.  It’s probably from the late 1950s or somewhere in the ’60s.

I would have loved this outfit as a child:

It’s silk with lots of nice embroidery and appliqué on the front.  While it would have been fun to play dress-up with these, I’m pretty sure Mom wouldn’t have let me wear them.  She was death on hand-washing anything!  The first trip through our old Kenmore washer would have turned the beautiful silk into lovely rags.

The sign below this piece of linen indicates that it’s from Bulgaria:

It is very handsome with a great geometric design and I don’t think the price is out of line.  We each have so many linens, that when we bring them home they’re either spectacular, or more in the nature of a rescue.  This piece didn’t fit either category for us.  I did a little research about Bulgaria’s embroidery history; if you’re interested in a short article, here’s a link.

For the milk glass fans:

This lady had a rather nice collection.  Thankfully, neither of us has succumbed to the allure of white glass.  It’s kind of shocking since we collect almost everything else!

This made us laugh!  There was a whole cabinet full of dolls, and this is what caught our eyes.  I had a big birthday this week and B.H. asked what I wanted to do.  I answered, “Lego Batman!”.  I may be old, but I’m not ready to be a grown-up.

We see lots of strange things on our rambles: 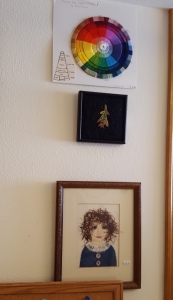 I don’t believe we’ve ever noticed an embroidered color wheel before.  I can’t even fathom the reason for making one.  I still have my paper one from a long ago, far away art class.  How do you wear them out?  The other odd thing about this room was the astounding number of quilt blocks that were never assembled into quilts.  We decided that she liked making the individual blocks, but was somehow prevented from taking the next step and actually using said blocks.

I actually regretted not having a doll house when I saw this one:

So cute, so cheerful; I want to live in that house!  I know they are big and expensive, but just for a minute, this doll house made me wish that I had room for one.

Well, thanks for dropping by to see what we’ve been up to.  I’m not sure what we have planned for the future, but you KNOW it will be weird and wonderful.