Jewels that Jiggle or En Tremblant

Look how fancy I am.  You just got about half of my French.  OK, maybe not that bad, but I don’t know a lot.  Today we are going to talk about jewelry with a little wiggle in its walk.  Both Deb and I are really rabid jewelry collectors, but we don’t seem to talk a whole lot about it on the blog, so I though this might be fun.  Plus, I just found out about a really interesting piece of jewelry that I will highlight later on, and I really wanted an excuse to share it with you all!  So first a definition.  En Tremblant means to tremble, and it refers specifically to a type of jewelry with a separate piece attached with a spring that allows it to move when the wearer is moving.  Most of the time these early pieces were flowers where the stamens or petals move, but it has been adapted to a lot of other things as well.  I also decided while we were getting jiggy to show a few other ways that designers have allowed their pieces to move.  So get ready for some pieces from both of our collections.

We will start with my true tremblers: 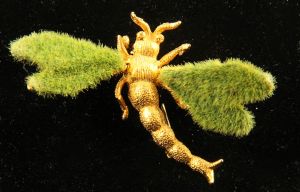 The green grass-flocked wings on this insect are mounted on springs allowing them to flutter.  I have no idea why he has furry wings.  The collective weirdness of this fellow made me buy him.

Here is view of the back so you can see the springs better.  Notice them up against the body on each wing:

He is even a signed piece, but still too odd to be worth a whole lot, except to a nut like me who likes bug pins of any sort.

This bluebird has the same setup for the front wing:

This one is a little odder in that the spring goes through a hole in his body allowing the wing to flutter in front of the rest of his body.  The body is cold-paint enamel.  Both of these pins are about 2½ inches across.

Now here is a true trembler in every sense.  This pin dates to about the 1860s, and it is the one I wanted to show off:

The larger blossom in the center is mounted on a spring shown here:

You can see the flat metal coil that allows this blossom to move with the slightest touch.

The entire pin is made of mother of pearl, and covered in hundreds of minuscule natural pearls. The pearls are held in place with gut. The whole pin is well over four inches long, so it was quite a statement piece.  When I first got the pieces, I kept thinking this was fishing line, and it was messing up my dating of the piece.  I tripped over some pictures of similar ones on Pinterest of all places, and was finally able to date the pin.  I also purchased a second much smaller piece at the same time.  They are so incredibly fragile that they just live in a box in my jewelry box, but I love them.  Here is a nice shot of the back showing how the whole thing is put together.  You can also get a better idea of some of the damage already gathered after 140 years: 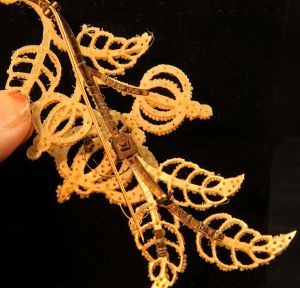 Now we move on to some other forms of movement.

Here is variation that we see now and again.  This mamma kangaroo’s little joey has a head that is able to bob due to being fastened on with a rivet.  The rivet is under the pin part, so I couldn’t get a very good shot of the back, but trust me, his little head moves.

These didn’t move so much on their own, but the wearer sure spent a lot of time playing with them!  Do kangaroos really have green eyes?

Lots of pins have suspended parts that swing with the wearers movement.  I highlighted this piece on our Facebook page a while back, but want to include it here, as it is just so darn cute: 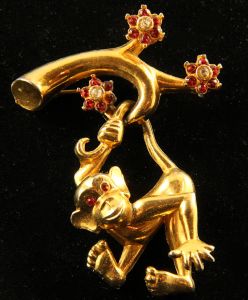 This piece probably dates to the late ’30s.  The monkey’s tail is hooked over the branch, and he swings from the trees just like a monkey should.  Every time I see this piece I think of the old song Abba Dabba Honeymoon!  No, I am not THAT old, I just had a lot of my Grandmother’s records and that one was in there!

Here is a modern twist on the swinging theme:

This pin is marked J.J.  They make decorative pewter jewelry, and I think they are some the most inventive folks around.  I snap up their pieces whenever I see them, as they always have a lot of whimsy.  Since they are still in business, they are a bargain right now, but I truly think they will be more collectible as time goes on.  The little cat swings gently with the movement of the wearer.  Just makes you smile, doesn’t it?

Here is another style of made-to-move jewelry: 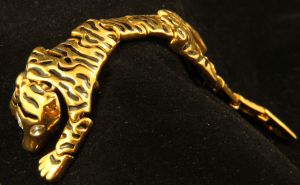 This tiger is hinged in many places allowing him to move with you.  Even more importantly he can drape over the wearers shoulder.  The pin is just under the front shoulders and he was made to be fastened there with the tail and lower body draped over the back of the shoulder.  Here he is full on, so you can see all the joints:

He is about 4 inches long.  I have actually never worn him, as he takes a pretty heavy sweater to support him, and then how do you wear a coat?  He still amuses me.

Deb here to finish off the post.  I have a few real tremblers too:

This might have been one of the first pieces of jewelry I bought from Kathy’s shop.  It’s a 1930s or ’40s cold-paint enamel and rhinestone brooch that’s three inches tall.  The trembler is the spray of red jewels in the top pink flower.  I should wear this more often.

Just like Kathy’s, not all of my trembling jewelry is elegant: 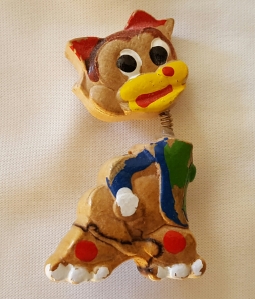 This little wood pin is marked Japan.  I’m not sure what creature this is supposed to be, but we decided it was a dog.  I got this as a gift from Kathy, but I would have bought it if I had seen it first.  You can see the spring right out in the open, but it’s stiff.  His head only moves if you flick it with a finger.

This lion isn’t really much better on the dignity scale:

This little guy is just weird enough to ring my bell.  He makes me dizzy when I wear him on a sweater; that spring behind his head is really loose.  His head bobs around like a helium balloon on a string.

I have pins that move in all kinds of ways.  The next two get all their shimmy from the “jewels” being on jump rings.

First up is this poor fur clip:

It is in kind of rough shape, and a lot of the finish has worn off the metal and fake pearls.  I only wear it on big sweaters and coats because it’s heavy, and I don’t like to poke two big prongs through my shirts.

This dainty pin is a favorite: 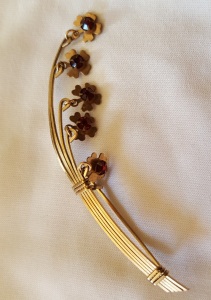 It doesn’t have a mark but I love its simple Deco lines.  The flowers tremble delicately every time I take a step.

This next pin moves with a lever: 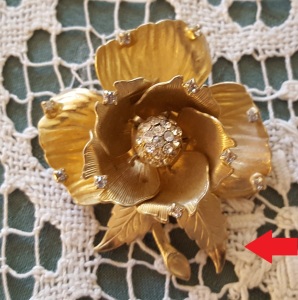 A leaf is attached to a lever.  The flower starts out tight, and as you move the lever up, the flower opens up on little strap hinges.  I also bought this pin from Kathy’s shop.  It’s marked Warner New York, which is a mark for Diana Warner.  She seemed to make a lot of moving pieces using levers.  It is extremely wearable and an eye-catcher at nearly three inches across.

This pin is a no-brainer for me.  He is only 1.5 inches tall and is marked Napier: 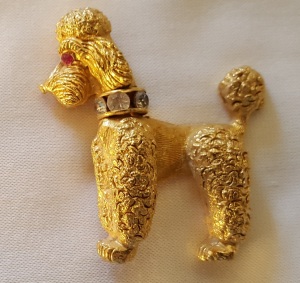 I am very careful with this pin.  The head is pretty shaky and I had another one that broke when I dared to move the head.  I do wear this for special occasions.

This little 1940s frog pin moves in another way:

His legs swing up and down on a rivet attached to the clasp.  He looks like he is dancing a jig.  He’s a little guy, measuring 1.25 inches.

Lastly, I have two pins with moving glasses: 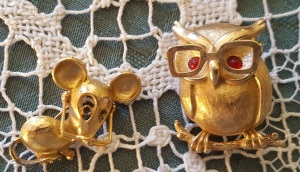 They are both an inch tall, and marked.  The mouse is marked Avon, and the owl, Coventry.  Since I wear glasses, I’m partial to pins with glasses.  I noticed that the poor mouse is missing his eyes, so I’ll have to fix that.  The glasses pivot on rivets attached to the side of the critters’ heads.

Thanks for reading.  We hope you enjoyed another one of our strange collections.  We have been talking about doing a post on our plastic jewelry, which for the most part is really wild stuff, so stay tuned.

4 Responses to Jewels that Jiggle or En Tremblant