Okay, spring has unsprung here in blizzardy Colorado.  I apologize for jinxing it for all of us; we’re supposed to get snow three more days in the next seven days.  Yesterday it was 70°F and today it’s a snowy 29°F with 25 to 35 mph winds.  Springtime in the Rockies can be a trying time of the year:

On a happier note, it was a bunnyrific season at garage sales, thrift stores, and estate sales.  We’ve been around more rabbits than the poor folks in that horror classic: Night of the Lepus.

Does this over-caffeinated rabbit strike anyone else as insane?  Maybe it’s the crazy, “Here’s Johnny” grin, maybe it’s his pop-eyed expression.  It would not surprise me a bit if that were the wagon from Monty Python’s Bring Out Your Dead skit.  To be fair, he might just be the Energizer Bunny’s younger more hyper brother.

The flip side of the coin from insano bunny, is this poor little guy: 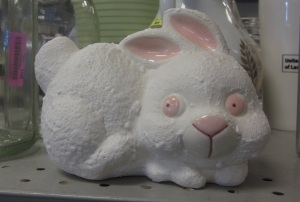 He is totally freaked out, and it escapes me how anyone could confuse him with a decorative object.  He’s seen or heard something that has scared the bejeezus out of him, and now someone kind needs to wrap him in a soft blanket and put him in a nice, safe place.

Every year we see a Bunnicula wannabe.  Here’s this year’s entry: 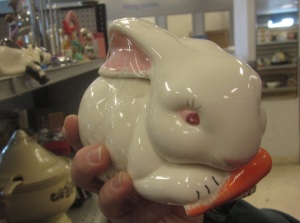 He’s sucking the juice out of a carrot right in front of us!  Those red eyes are a dead (hee, hee) giveaway of his vampiric nature.  Maybe that’s what poor scared bunny above saw.  In addition to a warm blanket, he probably needs some garlic and a crucifix.  We aren’t sure of the purpose of this pottery bunny.  His head lifts off, but we couldn’t explore his insides due to the tape wrapped around and around him.

This isn’t necessarily a bad thing if you like unadorned, pink wicker:

My problem with this bunny is that it’s about two and a half feet tall, so where do you put it after Easter?  It would last all of two minutes outside once the deer or its fellow rabbits found it, and that’s only if it doesn’t get blown away and slammed into something hard.  I could see it being a store display with a cute ribbon or tie, and some eggs in a basket in front of it.  Then off-season storage is their problem.

I know what this bunny is supposed to be holding: 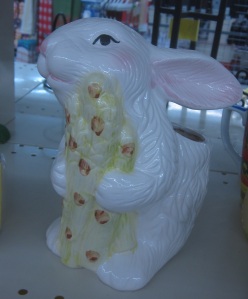 Asparagus is one of my favoritest things in the whole wide world.  I have even memorized the whereabouts of the wild asparagus patches along our bike trail and check them out every spring.  These pale green, unappetizing stalks don’t look like the delicious vegetable spears that grow in my backyard or the wild.  However, if I had to share asparagus with a rabbit, this is the kind of asparagus I would give it.  I should mention that I’m currently at war with the wild rabbits that infest my backyard.  They’re no end of trouble, no matter how cute they are.  Our backyard fox has moved on, hence the population explosion, but things are looking up since a BIG owl has move into the neighborhood.  Be afraid little rabbits, be very afraid!

Here are a couple of Easter plates featuring bunnies: 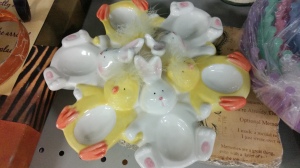 They are both pretty cute, although the egg plate doesn’t even come close to holding enough deviled eggs.  I might eat that many on my own, and then what would the guests eat?  The leftmost picture has a wonderful maple tea cart in the background (look for the orange arrow).  Kathy would love one of these, but the price of this one was pretty crazy, and it didn’t have a big wooden tray on top either.  We’ll keep looking at garage sales; it’s out there, we just have to find it.

This rabbit right here is part of the creepiest Easter display we saw this year: 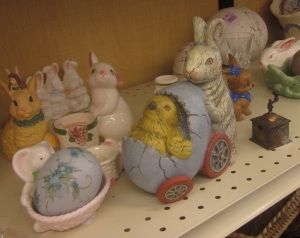 That cracked egg baby stroller is disturbing, and the poor little chick inside of it looks dead.  The zombie bunny pushing the stroller seems strangely unconcerned about the condition of the baby or the state of the stroller’s wheels.  I don’t know what is going on, and I don’t want to.  This resin monstrosity needs to be smashed with a hammer and all the pieces should be buried on hallowed ground.

We have a couple of post-Easter bunny pictures:

We didn’t set up either of these shots, we swear.  They both are so expressive of the exhaustion and satisfaction the Easter Bunny experiences after getting all the Easter goodies delivered.  Well done, little rabbit, well done.

This poor bunny has taken a different route for Easter egg delivery:

It appears that he stands on his Daddy Long Legs and chucks the eggs at houses.  Watch out E.B., Justin Bieber got in lots of trouble for throwing eggs.

He’s actually sweet with all the flowers on his side.  Much better than the bunny behind him.  I’m not sure why his Easter duck or chick friend to his side is brown; aren’t they usually yellow?  See, Easter Bunny figurine makers—this is what you were shooting for with all your horrible fails.

We have a few odds and ends pictures of Easter associated things.  We aren’t sure that anyone needs this for a seasonal display: 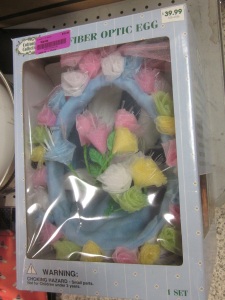 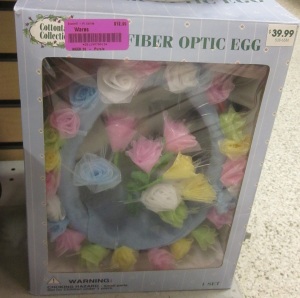 All of our readers should know by now that my camera works really hard to protect you from seeing really awful things clearly.  I took FIVE pictures of this stinking nearly two-foot-tall fiber optic egg and all of them are blurry or distorted in some way.  I blame the camera’s protective urges.  This thing is just hare-raisingly atrocious.  (You didn’t think that you were going to escape pun free, did you?)  We aren’t fans of fiber optic anything.  If you need to add fiber optics to make your product salable, you’ve already failed.  Imagine our surprise when this was gone in a week or two.

We aren’t sure this is strictly an Easter decoration:

But if it isn’t, just what is this metal eggstravaganza?  If it were supposed to be for Easter, there should be a couple of pastel colors splashed around.  On the other hand, if you have that 1960s white French provincial furniture, you would probably think that this is decorative and Eastery.

Finally, I was looking at something on the shelf, and saw this little guy peeking at me: 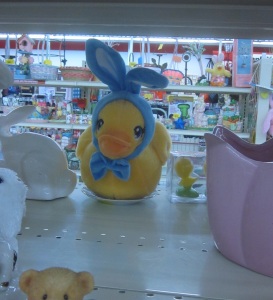 Honestly, it’s kind of cute, and I am amused by rubber duckies appearing in places that you wouldn’t think they belonged.  B.H. has a whole collection that sit on the bathtub, from witches, to Shakespeare, to Brainiac.  They make him smile, and that’s good enough for me.

Kathy here:  Just a quick link added, as we forgot to put in the link to this years Peep Show, and we wouldn’t want you to miss it.  Washington Post Peep Show

Happy Easter to everyone.  Here is the last of Kathy’s Easter cards that we have been featuring on Facebook.  They are mostly from the 1930s and ’40s shared between parents and their son. 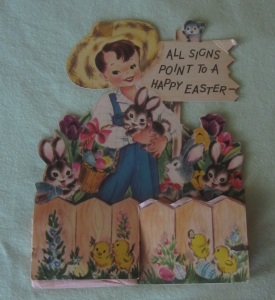 2 Responses to Abounding With Easter Bunnies