Ah me, it’s the middle of January.  Who said that was OK?  There is a big mucky mess of snow still clotting up our street and trailing up the driveway, the wind is blowing, and it is still chilly.  I decided several years ago that January and February were totally unnecessary months.  I have received a couple of seed catalogs, and there are gardening supplies showing up in the stores, so I am pretty sure spring is coming, it’s just taking its own sweet time.   I guess we will just have to shop.  Oh yeah, we do that anyway.

I am never sure whether or not to start out with something awful, or if I should soften you up with a goodie.  I guess, today, we will start up with the bad, slip in a few goodies, and end with a monstrosity.  How is that for a plan? 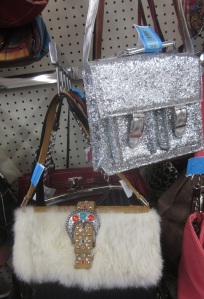 Would any self-respecting woman be caught dead with either of these?  The silver one might be useful if you were lost in the woods—you could signal low-flying aircraft with it.  Of course, you do run the risk of blinding the pilot and ruining your only hope of rescue.  I don’t know what to say about the furry one, except that the rabbit looked much better in that fur and fake jewels do not improve it one iota.

Near the purses was this massive display of tacky plastic earrings:

I am going to hope that an enterprising ten-year-old got a bead kit for Christmas and hoped to bring in a little extra money.  Please don’t tell me a grown-up did these.  They worked so hard, but a trip to a classy bead store might be in order.  Far be it from me to quash creativity, especially in our youth, but let’s let the plastic beads lie, preferably in the trash.

While we are jewelrying (I am almost positive that is not word, except in our vocabulary.) we spent some time debating the merits of this necklace: 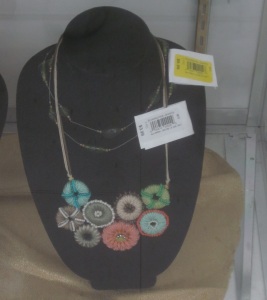 It seemed sort of interesting, and on a closer look was rather clever: 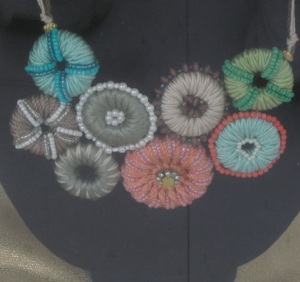 We didn’t remove it from the case to see what they wrapped up to achieve that effect, but I am guessing washers?  If so, it probably weighs quite a bit.  It would turn you into a hunchback while wearing it.  I think we might have given it a resounding yes, if the colors had been a bit more coordinated.  I know, picky, picky.  But someone else must have agreed, because there it was in the thrift store.

Time for one of my favorites:

Oh yes, that cord hanging down on the right side serves a purpose: 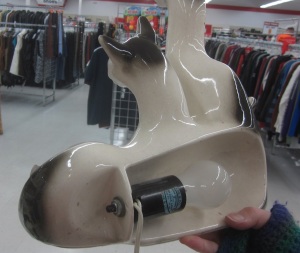 It’s a lamp!  So fabulous.  It brings tacky to a whole new level and I adore it.  I wanted this so bad, but they thought it was worth $15.00, and I knew my husband would completely disown me, if it had made it through the door.  I needed one or the other of those impediments removed, and it would have been mine.  The only way this could have been any better, was for the blue eyes to light up.  Then, it would have been impossible to resist for any reason.

Just so you don’t think we have slipped, time for some more bad:

This has to be about the ugliest apron on the face of the earth.  We know why they lost heart and decided not to finish it.  Frankly, I wonder that they were able to get as far as they did without the guilt of inflicting something this horrible on the world making them unable to lift a crochet hook.  We tried to come up with even one redeeming feature, but nothing came to mind.  Maybe it kept someone off the streets for a few evenings, but I am not sure we are better off for that.

I don’t know why, but I have never been a fan of the Raggedys.  I think it might have been because Mom thought that I would be better off playing with them than that trashy whore, Barbie, but I was having none of that.  In any case, I know why I don’t like these two:

Why are they so orange?  Too many carrots?  Or was it just a concession to the ’70s and all that free-range orange running around in people’s homes?  I am not sure if these were made for a bedroom, or if they are traditional plaster bathroom ornaments.  But it doesn’t matter; they should never reside in either of those places ever again.

This next item was just plain odd:

This mask was entirely made of skins.  Even the base of it was made of some sort of hide:

We were kind of creeped out by the whole affair.  I suppose is it some sort of Alaskan native thing, but I am sure it was made for the tourists, as the indigenous folk have much better taste for themselves, and make lovely things.  But why bother to work harder when there is some sappy tourist around every corner, just dying to throw some clothes out of his suitcase in order to cram this in?  We will say it again.  Buy a postcard!

We loved this wonderful rose-patterned china: 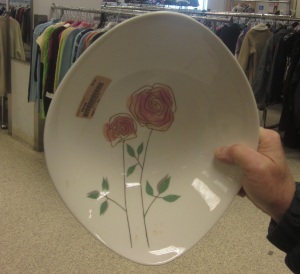 Very cool shape, and a lovely pattern.  It was even the good stuff:

Iroquois dishes had a fab postmodern look to them, and were made well.  They did great in a more modern relaxed home, standing up to everyday use, and even the dishwasher.  What more could a busy housewife ask for?  Check out the link for some info on the designer, Ben Seibel.  I had never heard of him, so it was interesting.

OK, here it comes.  This just totally terrified me:

I am going to give this one a big old WTF?  I know it’s a cake plate, but if your goal were to scare your entire family away from the cake, this server is for you.  Who would EVER give up any cupboard space to something this ugly?  I would slap that two-layer devil’s food on a paper plate before I would ever let this thing in my house.  On the bright side, I suppose it would keep your cake moist, as it is covered, but seriously, some Saran Wrap would do the trick, and there would be no ceramic berries in sight.  Let’s hope someone knocks this baby off the shelf soon.

Hope winter is dwindling into a distant memory for everyone soon.  I think I am beginning to have garage sale withdrawal symptoms.  Send warm thoughts our way!

5 Responses to Sludging Through