I finally joined the modern world a couple of months ago, and have a phone that is waaay smarter than I am.  Not that it would take a whole lot to accomplish that, but still.  Anyway, one of the joys of the new phone is always having a camera with me.  But … that also means the photos tend to pile up, and we forget to post them, so here is a passel of things that have been languishing in my little black magic box.  (You can see how technologically advanced I am by that last statement!)

For some reason it is sticking in my mind that I have seen one of these before, and we might have even posted a photo, but with close to 4000 photos that we have posted, I can’t remember for sure, so you get it again!

You’ve got to admit that is some SERIOUS paper folding.  It was all made out of these tiny little triangle-shaped folded units.  I just can’t imagine sitting around doing that, and I LIKE origami.  I sort of feel bad that it was sitting out at a yard sale for fifty cents.  That is rather like sweat shop wages or worse.

CLOWN ALERT, just getting you prepared, not yet though.

Have you ever seen a pair of shoes that are so ugly that nothing will save them?  Well, we now know how to make them worse:

These must be for the well-dressed Wicked Witch of L.A., where glitz and glamour reign.  Even your basic black pump would go from Wow to Ow with these babies.  The misguided soul at the sale thought they were worth 50 bucks.   They had better pay someone a couple of bucks to take them away.

While we are patrolling the gaudy spectrum, you had better take a look at this:

This is the most seriously over-dressed church key I have ever seen.  To top it off, it is a souvenir of Cheyenne, WY, and if you have ever been there, you would know that there is no place in the whole of town where rhinestones would look at home.  Slap a horseshoe on it and you are in business, but not gold plated furbelows.  OK, I did buy it, but to my credit it was only a quarter, and it made hubby laugh.

Hubby and I spotted this at a recent sale and were over-whelmed: 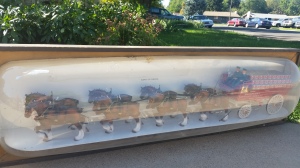 This was well over six feet long!  That is a lot of Clydesdales!  The lady said her son had picked it up when a bar was closing, and they had owned for quite a while.  The price was well out of our reach, as was the fact that we would probably have to sleep with it to have room for it, but it was awfully cool.

OK, hold on to your hats; here they come!  Did I mention there were two? 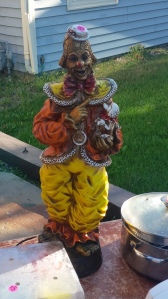 I am so sorry, but you should probably feel sorrier for me, as I saw him in person.  This fellow was well over three feet tall and every inch of him ugly.  That poor poodle in his arms must just feel like biting him.  This is another one of those situations where you wonder what the original use could have possibly been.  Other than to terrorize children, or possibly a place to drape your coat (so you can’t see him!), what use is it?

I thought it only fair, as I found a doggie clown for Deb, that I include a kitty one for me: 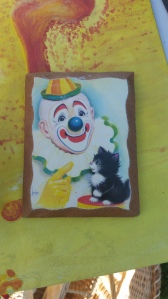 Mine is not nearly so scary, and if you focus very hard on the cute kitten, you can almost miss the clown.  I said ALMOST.  I didn’t realize till I uploaded the photo that the painting underneath it rather makes it look like he is exploding from his hat upwards, but maybe that is a good thing.

Alrighty then, that is out of the way, so now I am going to make you laugh:

Come on, you can’t tell me a giggling bunny doesn’t at least make you smile!  This little fellow is about six inches tall, and is German Rosenthal china.  I didn’t think the Germans had much of a sense of humor, but apparently this little rabbit just heard a good knock, knock joke.  We picked him up at a sale by one of the companies we normally don’t care for.  He was stuck down in the basement, and no one noticed he that was good china, so he came home with me to add to my “bunny not a collection” (Don’t ask!) for a couple of bucks.  Where else can get a smile for that price?

At another sale a couple of weeks ago, Deb and I both picked up some hankies.  After you reach a certain age, you need a hanky just about all the time, and we both buy, carry and use them.  I thought this one was pretty, and just a generally nice design.  Came home, dropped it in the wash, and got this back: 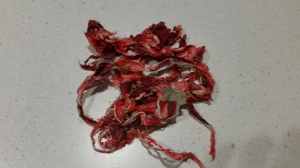 I have no idea what type of dyes they used on it, but they caused a pretty severe case of fabric rot.  The whole thing just fell apart in the wash.  So much for that one, luckily I will not be running out of them any time soon.

This next item was also too big to be of much use for most people, but it was pretty fabulous: 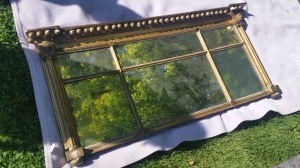 It was four to five feet long, so was probably an over mantel or back bar type piece.  The whole thing was gold gesso (that is what they call the plaster under most late 1800s molded frames) with nice old mirrors.  I particularly loved the lion heads in the corners: 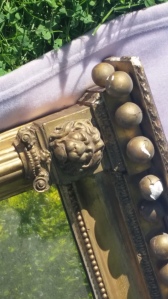 You can see the damage on it, so it would have been a bear to get looking good, but imagine what it must have looked like in its day!

I noticed I had forgotten to post my Tour De Fat pix for this year.  For those who don’t know, or haven’t seen them in the past, New Belgium Brewery’s home base is Fort Collins, CO.  Every year they host a big bicycle parade named after their famous beer, Fat Tire Amber Ale which in its turn is named after cruiser bikes with “fat tires”.  Almost as many people come to watch as to ride in it, and thousands ride it every year.  Creativity is a must, and it is a fun day for all.  Here is a collage of some of my favorites:

The Tin Lizzie bike in the top photo was probably my favorite!  The guy on the unicycle juggling, fell right as he went by, but he hopped right back on his ride and continued on.  If you look closely in the purse of the lady in the melon-colored dress, you will see her chihuahua enjoying the parade as well.  Had to take that shot for Deb.  Hope you are enjoying the last weeks of summer where you are.  We will keep our phones nearby, and will always have a new photo or two for you.