Well, it hasn’t just been a couple of days–it’s been weeks!  Seriously, we’ve had 6.30 inches of rain in the last 30 days and probably most of it has come in two to three weeks.  I lived in Oregon for three years, and mowing the lawn in the rain ranks REALLY low on my list of favorite chores.  Of course, we are mostly unhappy because it’s slowing down the garage sales, and we haven’t gotten our gardens in yet.  My neighbor said to me this morning, as we passed each other in the mist, “Give us a couple of 90°F weeks and we’ll be crying for cool and rain!”   True dat!

We saw this ’50s blond bedroom suite recently at a local thrift:

The label in the drawer said Permanized Mengel Furniture which seems like a fair claim, what with the good overall condition of the headboard and chest of drawers.

A brief internet search revealed that the Mengel furniture company was started shortly after the Civil War in Kentucky.  They made quite a bit of the blond furniture between the ’40s and the ’60s.  My favorite part of the whole shebang are the drawer pulls.  They have that mid-century modern flair.

Speaking of flair, or lack thereof:

This couch was so bright and busy that the only place you might want to put it would be the basement or your informal sun room.  This picture was taken on a gray day and look how bright it is!  If the sun were shining, you would probably need your sunglasses in the house.  I can’t remember the exact amount they were asking for it, but it provoked the “Yeah, right!” response from us.

OMG, I just found this picture in the April photo files–gasp, you might have missed it:

What a big tub of crap jewelry that Goodwill had on sale for $129!  We couldn’t believe that anyone would bother going through this pile of plastic in search of something to justify the price tag.  We know from experience that our local Goodwill never puts anything good in the giant grab bags that they price at $8.  Just imagine how disappointed you would be after buying the equivalent of 16-plus grab bags.  Also, you would have to somehow humanely dispose of the remains; I suppose you could rent a Bobcat to excavate a suitable grave in your backyard.  And yet, it was gone the next week, and we doubt that anyone shoplifted it!

I’m not sure what inspired this tile:

I call it Forbidden Love; once you get your wine goggles on, you forget that you’re a cat and he’s a dog.  They do seem blissfully happy, so who am I to judge?

There were quite a few kitty things at the thrift last week:

This was the homeliest bunch.  The big white and black sleeping cat in the center isn’t bad, just sort of boring.  It’s the two smaller ones to the right who  probably suffer from low self-esteem.  The one in the front seems to be in a production of Oliver! playing the role of Oliver Twist when he asks for more porridge–he’s that pitiful.  Meanwhile, the gray-green tabby in the back seems to have hyperthyroidism, or he might have had a little too much Red Bull.  He’s wide-eyed and bushy-tailed for sure.

We saw this poodle princess and wondered what her story was:

She suffers from the opposite of low self-esteem; confidence seems to ooze out of her.  She makes a nice change from all the piggy banks we run into.

We just had to laugh at this fellow: 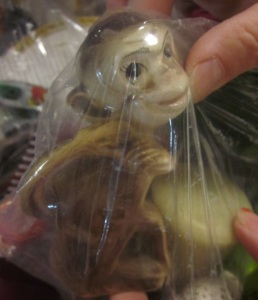 I hope you can see the fur on his tail, although it kind of looks like squirrel, not monkey fur.  The more I look at him, the less funny and more creepy he gets.  The expression on his face is kind of disturbing.  Of course, being sealed up in a plastic bag would give anyone a funny expression.

Since I seem to be on an animal roll right now, might as well throw this picture into the breach:

We aren’t fans of these poorly executed pieces of resin–it wasn’t even a china swan.  I just don’t understand how such a graceful and lovely bird can be represented in such a clunky and unlovely way.  I much prefer the blown glass swans of my childhood that were filled with water tinged by food coloring.  They were at least fun.

We need something fun right now: 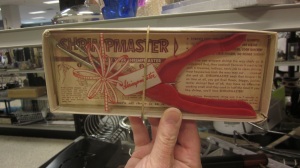 How about a Shrimpmaster?  You can see that it was never used, at least not for its intended purpose.  I wish I were participating in a white elephant gift exchange; the Shrimpmaster would be a perfect offering.  Being a vegetarian, I’m not quite sure why mastering a shrimp would require a tool three times its size, but they must be feisty little buggers.

Here’s another thing that is larger than what you might expect:

This punch bowl dwarfs the gallon watering can in the foreground.  We have never seen such a huge bowl.  It would be murder to move when full, and when empty it would take up a whole shelf by itself.  Of course our least favorite estate sale organizers were asking way too much for it.  Sometimes it’s not even worth going to their half-off day, since 50% off is still 20% too much.

Last but not least: 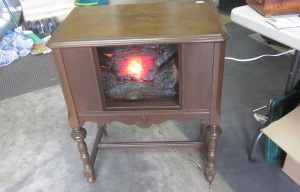 Have you ever wondered what to do with that banged-up old cabinet you foolishly bought at the auction?  Wonder no more–it can be your brand-new fireplace!  We were looking at this while it was unplugged in a garage thinking, “What in tarnation?” when the seller walked over and plugged the cord in.  We did not see that coming!  This cabinet surprise symbolizes what we love most about being Secondhand Roses–we see something amazing every week!

To all of our US readers: please have a safe and fun Memorial Day weekend!

2 Responses to Mama Said There’d be Days Like This