I am going to have to admit that almost all the photos in this week’s post come from one sale.  It’s not that I am lazy (well, it might be, but not in this case), it was just such a collection of bad that my camera kept snapping, and snapping, and snapping.  I will give a warning that the majority of this week’s post is about as bad as it comes, with one especially heinous piece at the end.  But, I do promise you something to clean the taste out of your mouth, so gird your loins and read on.

This family was kind enough to post photos of their delightful estate items in the ad, so I was sure I had to trot on over to this sale, just for blog fodder.  Having seen the photos and the prices of some items, I was positive that there would be plenty left, if we saved this sale for the end.  My long-suffering hubby obliged, and after a fairly successful morning garage saling, we ventured in.

Here is nice overview of the living room displays: 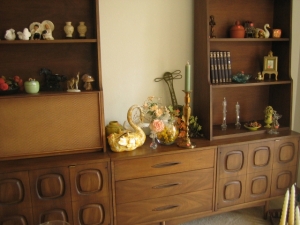 It sort of looks like someone decorated in 1975 and forgot to ever move anything ever again.   Actually, the whole place looked like that.  There were no jarring modern elements anywhere!  I kept trying to like the late mid-century modern book cases, but somehow, they just looked dated and old.  Didn’t help that the swan with the fatal disease was showcased prominently: 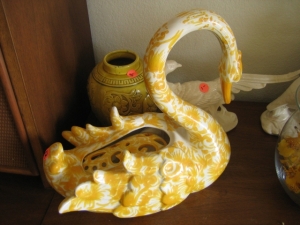 Thank God, the requisite plastic flowers were missing. The poor thing has yellow spots all over.  Someone really ought to give her liver, or mine, a once-over as the biliousness set in pretty fast as we toured the home.

Also in the living room was this charming table grouping:

Here the plastic flowers were in play, and the ubiquitous harvest gold table cloth set everything off nicely.  Looking back at the photo, I see that the pumpkin might have been OK, but there were so many distracting elements that it was hard to find anything to like. To light up the scene we have a lamp:

I don’t know what they were going for here, but it looks like someone took a bowl of popcorn, dumped it on a 2×4, added gilding, and then varnished the whole thing to shiny perfection.  Again, everything was in pristine condition, so you had the oddest feeling of time travel walking through the rooms.

Next up, the wrath of grapes, at least I think grapes would be pretty ticked off to be stapled into a picture frame: 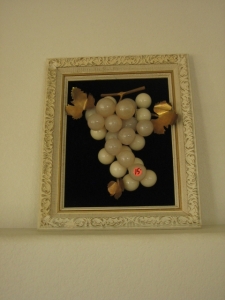 Notice, no one snapped these up at the bargain price of $15.  I am going to go out a limb here and say they might be bearable if removed from the frame and laid on a coffee table, but I could be wrong.

Moving into the bedroom, we see the owners worked part-time as clowns.  How else to explain those orange shoes? 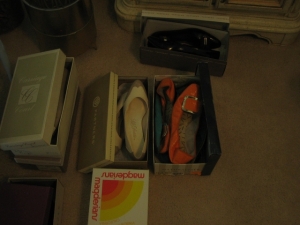 Actually, I am pretty sure we have showcased some orange print double knit fashions in the past that might be a pretty good match.  These shoes were not very worn and still in the box, so maybe she had the good sense not to be caught dead in them.  Maybe the whole ensemble will be reunited in a thrift store near you.

Another lamp, well, actually a pair of lamps, but I took a pic of just one of them:

I didn’t want to overwhelm the senses with the two of them.  Good thing they had two, as who would want to see them squabble over who got the “good” lamp on their side of the bed.  All I can say on their behalf is that they would shed light on a good book, but so would a socket on an electric cord.

To polish off the bedroom, we have this grouping:

It’s green.   What more do you want?  OK, for some reason, while I was looking at them I was reminded of Green Goddess salad dressing that was popular in the ’70s.  I don’t know why that popped into my head-maybe the avocado green of it all.  They sort of remind me of some of the crafts made from gluing cardboard together and spray painting the whole shebang.

I did see a couple of things at other sales to add on.  First up, an accessory for all you cat owners:

An inflatable unicorn horn for you favorite puss.  It even says “cats love it”.  I am pretty sure the expression on that cat’s face has NOTHING to do with love.  After this photo shoot the cat’s owner had better check his shoes for an expression of just this kind of “love”.  I know it would take two knights in full body armor to persuade my cat to have anything to do with this.  What’s more, as he has a rather odd tendency to chew on anything made of plastic, I am positive the problem would not be around for long, as the inflatable part would be rendered nil.

OK, you need to brace yourself.  I did not see this next item in person, rather snagged the photo from an estate sale ad, but I am pretty sure it could only be worse in person: 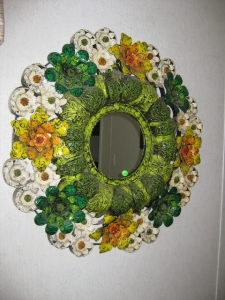 I would have gone to this sale, but it was in a town about 30 miles away, and I have a serious question about the number of folks turned to cold hard stone, Medusa-like, as they viewed this.  The mirror is probably so the owners could watch it happen without having to look directly at the surrounding horror.  It’s like a salad that exploded with flowers.  I have no idea what the manufacturers were going for, but I hope it failed, and the original idea was MUCH better.

All righty, I promised you something to clean your mind of the crud above, so here it is:

Another friend and I dropped our kiddos off at a water park and went to the Denver Botanic gardens to see the Dale Chilhuly glass exhibit in the gardens.  It was breathtakingly beautiful, and worth the entire day spent in the sun to enjoy it.  If you ever have the exhibit come to a place near you, get your fanny there ASAP.

Deb is back in town, school starts soon, which means life should be getting back to normal, and so should our posts.  Well, at least as normal as they ever get!  Till next week.