Howdy from St. Clair Shores, Michigan.  Beloved Husband and I are visiting family and poor Kathy is home in Colorado having no fun on Fridays.  Avert your eyes, my dear friend, because if you don’t, you’ll see how much fun Dorothy and I had at her favorite antique shop.  But I’ll be home before next Friday and the two crazy, shopping ladies will be reunited.

First I want to thank my sweet s-i-l and nephew for their hospitality and understanding of my perverse hobbies (this blog and shopping for the very bad as well as the very good):

Of course we don’t use real pictures of people.  My s-i-l uses these little figures as her family avatars.

As soon as we could, we beat feet to the antique store.  It had a number of booths rented out so there were lots of different collections to sift through.  I knew we were in for an afternoon of fun after seeing this near the front door: 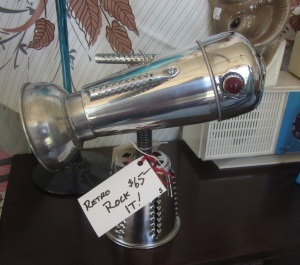 Some folks have way too much imagination!  I’m pretty sure that red bulb lights up because there was a battery under the cap.  We looked at the list of ingredients and found them all.  We weren’t so enamoured that we would plunk $65 for this.

Along the same lines, there was this creation in the back of the shop: 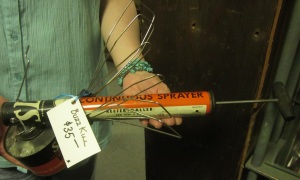 It somehow seems appropriate to make an insect out of an old sprayer.  Think of how many bugs were killed by it, and now it’s a bug itself.  That sentence made my head hurt!

As many aprons as I have, I do not have a crocheted one like this:

It looks like some enterprising crocheter used a tablecloth pattern or doily pattern and made an apron.  She used big pink satin ribbon for the ties.  I wasn’t tempted because I rarely spend more than $5 to $7 on any apron.  Not to mention the more pertinent fact that I have wwwaaaayyy too many aprons!

This was the cutest little bean-bag dachshund.  It might have come home with me if it hadn’t been an ashtray: 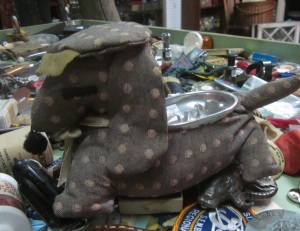 We imagined it sitting on the dashboard of a big old ’60s car and precariously holding the cigarettes as the family sped down the freeway.  I’m not sure of the wisdom of having a fabric ashtray.  It kind of reminds me of my rebellious teens, when I smoked because it was cool.  While driving one day, I threw my cigarette out the window (bad Deb!) and of course it blew into the back window and set the back seat on fire–just like I deserved.  Thank God I had a big McDonald’s Coke that put out the fire pronto; my parents never even noticed since there had been plenty of spills on that seat. 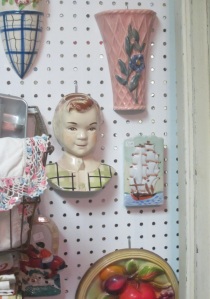 He looks so naughty that I’m sure he was filled with precut birch switches instead of plastic flowers.

We were looking through paper ephemera, when S-I-L handed this to me with the comment, “Not a crow left in her neighborhood!”

How could I top that except to mention how much this picture reminds me of Maleficent’s grandmother.

In the very same booth with the crow-wing hat lady, were these very cute shoes with a lucite heel: 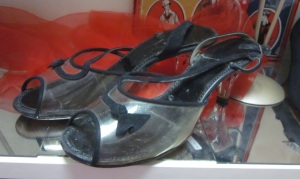 From the amount of wear on the heel and sole, you could tell that the lady with the dainty feet adored these shoes.  Alas, my big clown feet can’t be shoe-horned into the itty-bittyness of most pairs of vintage shoes … sigh.

Things are going to get a little bumpy for the next three pictures.  There was some inexplicably awful stuff amongst the good: 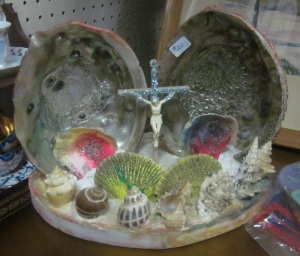 Beloved Husband saw this picture and punned, “Jesus died for our fins”, or, “Behold the Son of Cod”.  It’s as likely an explanation as any.  Again, I beseech the people of Earth to stop doing this to sea shells.  The glitter and Dayglo paint are the venial sins here and wouldn’t require near the penitence that the rest of this diorama will.

They just went too far with these salt and pepper shakers:

With apologies to Gellet Burgess:

I never saw a Purple Cow,
I never hope to see one;
But I can tell you, anyhow,
I’d rather see than be one.

Would you believe that both Beloved Husband and his sister recited that poem as soon as they saw these cows?

I just don’t understand what in tarnation is going on with this bust:

Why would you do this to an innocent and acceptable bust of a young woman?  Are you a crazy misogynist who hates women, or is it a matter of irredeemably bad taste?

Okay, veering back into the world of good (according to Kathy and Deb): 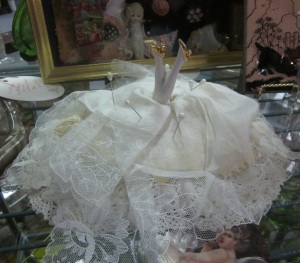 This is the most awesome pincushion doll I’ve ever seen!  I loved it and seriously thought about buying it even if it did cost $35.   I curse my innate cheapness, but it would bother me if I spent too much on it.  The fabric is a very ornate hanky which only adds to the wonderfulness.  Of course I flipped it over, but it was only a flat fabric base, not the doll’s upper body.   You better believe that I’m on the hunt for this pincushion doll at my price.

Another reason not to buy the doll was this purse, which I DID buy: 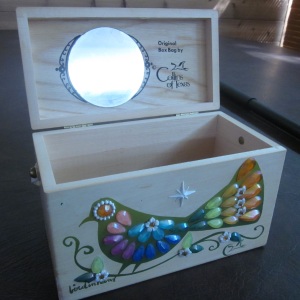 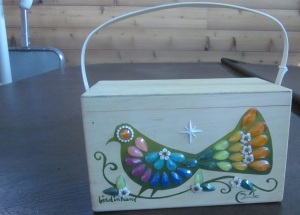 Oh, how I love Enid Collins’ purses.  This is the second one I have found this summer, and the price was good enough that I shucked my inhibitions and bought it.  Okay, that’ll probably be it for years and years.  You just don’t run into that many of them where we shop!

Thanks for reading.  It’s about time to do another giveaway, so stay tuned.  Plus the monster garage sale at the Unitarian church is coming up, and you never know what we’ll find there.

14 Responses to It’s a Family Affair