The Waaaay Back Machine

OK, maybe garage sales and thrifts aren’t really time machines, but they do give us a glimpse of how we used to live, and sometimes it was pretty darn funny.  What were we thinking?

For instance, what hostess would have been without an electric bun warmer like this?

Wearing your Lilly Pulitzer dress, and serving drinks–you would have been so groovy.

While you are keeping your buns warm (by the way, my buns would be way too big to fit in that!) don’t forget the rest of your meal:

I am thankful that coffee is hot, and it had better be strong, because those candles would definitely put me off my feed.  Actually, these warming trays were pretty handy, and I wonder why they don’t still make them.  I have a small one for my coffee, and it’s great, as I frequently get caught up in something and forget to drink it.

Both of the above items are better than the following:

I don’t know where to start with the ewww factor.  The color doesn’t show as well in the pic, but they were a particularly appalling shade of pink, plastic and just plain icky.  If I were a fish, I would slither off there toot suite, even if I were parboiled already.  After looking at these some more, I remembered we have dissed these items before.  Check out  A Plethora of Plaguey Items.

Just to make up for that, we want to show our favorite, oh-so-cute thing of the week.  Check out Grandma’s party in a server:

No, really, there is everything you need right inside:

Rotating Happy Birthday cake plate, and your do-it-yourself cake decorating kit.  She was ready at a moment’s notice to save the day with cake.

We made the colossal mistake of driving to the outskirts of town for an estate sale, not realizing it was a company that we just hate.  They have high prices, and their lines and wait times are appalling.  Since we were out in the country, we decided to stay, but it was just as disappointing as ever, and we had to stand there for over 45 minutes.  We gave them an earful, and will never go back.  The only bright side was this bedroom set, and boy was it bright:

Notice the 3D flowers on the tissue box and nightstand.  Not ready to stop with that, they went on to adorn the headboard: 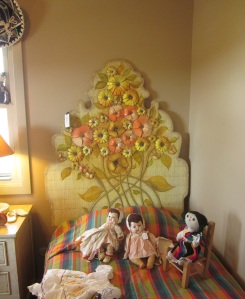 When all was said and done, there were two headboards, two dressers, the nightstand, and the tissue box that were attacked and mauled by bouquets of eye-openingly orange flowers.  It was quite the look.

At least it wasn’t as scary as this doll:

What are they trying to do to children?  She looks like a very happy drunk, or maybe she just has something terrible stuck in her eye causing her to blink and scream.  Didn’t help that her hair had been attacked by a rabid bird intent on making a nest, or so it seemed.

Returning to the kitchen, we found this in the same thrift as the doll and the shell servers:

These were actually rather pretty, and I was tempted, but as you will see in an upcoming post, neither of us needs anything more like this.  Not that this has stopped us often, but in this case it did.  Might be because I am overwhelmed by pink in our new house, and trying to get rid of it.  Thank goodness it wasn’t turquoise.  We frequently are amazed at how many of these things survive, in their boxes, unused.  We can never figure out if they hated them, or liked them so much they didn’t want to ruin them by using them.

Of course no amount of use could make this better, or worse.  It is just plain odd: 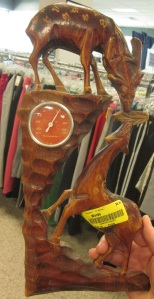 Well, it’s carved, it’s wooden and it’s a thermometer.  Not sure what else there is to be said.  We were pretty speechless at the time, and it hasn’t improved with the passage of time, or the rise in temperature, in this case.

This last item just made us laugh: 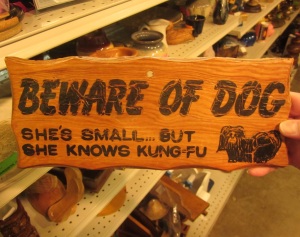 If we had known anyone with a dog even vaguely resembling the one on the sign, we would have snapped it right up, but at least we took a picture.  Now that you know, you can make your own!  If you do, send us a photo, or share your latest finds with us!

8 Responses to The Waaaay Back Machine