Be Kind to Animals, Please!

Deb and I are both sort of animal nuts, and we buy lots of animal-type stuff, especially dogs and cats.  But, the following photos show that not everyone in the world has an animal’s best public image at heart.

Take, for instance, this first entry.  We had to spend quite bit of time just figuring out what they were trying to represent: 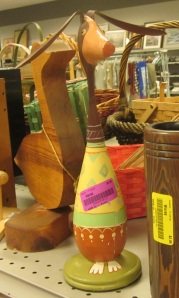 Is it a bowling pin gone AWOL from the lanes and having an identity crisis?  No matter what, I am pretty sure some therapy is called for here.

Perhaps the above animal was forced to sleep on this pillow causing all sorts of weird mental anguish; we know this caused us some visual anguish: 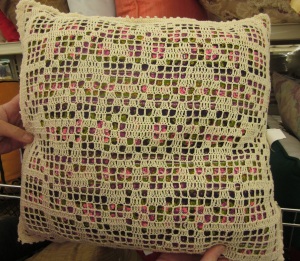 Now, from a distance, it looks mostly harmless, in fact, a rather nice example of filet crochet, but once you get a gander at the fabric choice for the lining, it all goes downhill. 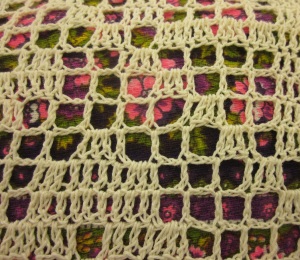 Now, I am a firm believer in making do and using what you have on hand, but I think I could have delayed finishing this craft long enough to get to the fabric store and make a better choice.  To add to the insult, it was made so well, and actually crocheted together over the pillow.  No chance of removing the offending fabric and replacing it with just about anything.

See, this rabbit agrees with us.  Either that, or he just naturally wears this stupid expression.  Now, come on, rabbits are cute and cuddly.  This one just looks like he is out to lunch, or maybe he has just had enough of folks pouring milk out of his head.  (Yeah, it was a pitcher!)

At least he hadn’t caught some rare fatal disease, like this poor fellow:

Really?  He is tacky and golden and then you had to give him a plague, too?  I don’t know what else could have caused those leprous cracks.  At least when you leave him outside and he develops cracks in the surface, you won’t even notice.  Of course, how are you ever going to know when it is time to throw him away?  Oh, I know–NOW!

If one animal is not enough for you, how about a whole ARK FULL?

The animals on here were not too bad, except for being that nasty resin stuff.  We were mostly amazed at just how many different animals they were able to cram onto one sculpture.

We were particularly amused by the lightning and the eagle on a spring.  But if you have an animal thing, there were probably two of them on here.

Another fairly heinous crime against animals is the shell mania.  At least if you are going to use the shells, try something decorative.  NOT this:

That hanging in my, of course pink, bathroom would be enough for me to start using an outhouse.  Better yet, maybe hang the clock in the outhouse!  It’s a long trek back up the hill, better know when to start.   If you must hang something up in the powder room, try this:

I loved the fact that they were still pristine in their box!  There were several things from this era at this sale, still neatly and tidily kept in their boxes.  I did buy some linens in the same condition, but that is for another post.  I did manage to leave the fish for someone else.  Think of it as catch and release.

These roosters are also having a little identity problem.  I don’t know what is with the dungarees, but it seems a bit ridiculous.   Plus teaching a rooster to smoke (a peace pipe?) is just plain animal cruelty.  At least they gave the control group umbrellas, but they were stuck with glasses.  Basically handicapping them all around.  I am pretty sure these are the dweeby roosters in the hen house:

Could be worse I suppose, they could be the donors of enough feathers to make these hats:

That’s a whole lot of down!!!  Apparently, the lady of the house had a thing against birds (Tippi Hedren?) or a thing for feather hats.  The hats were pretty amazing.  They must have been stored very well to be in such good condition after all this time.

Just thought we would leave you on a high note, as these made us smile.

If you are going to get married in Hawaii, on the beach, these are the perfect accessory.  Come to think of it, I could go for renewing my vows in Hawaii.  Should’ve bought them!

Here’s hoping your breezes are all tropical, till next week.

7 Responses to Be Kind to Animals, Please!