Another Friday, Another Estate Sale

Oh boy–two estate sales in one month!  This one sounded even better than the first one; it advertised costume jewelry, linens, craft books, and much, much more!  You can’t even imagine how much stuff was in that house.  Sadly, the prices were nowhere near as good as the sale we went to a couple of weeks ago.  We were accompanied by a faithful reader, Connie; she picked a good day to shop with us because we also hit a really good garage sale.

Most of our pictures come from the estate sale–you had to wade through a ton of bad to reach the good.  Sadly, the costume jewelry wasn’t to our taste, to put it mildly.  We say “no thanks” to overpriced plastic beads and unattractive brooches.  Strangely enough, lots of the figurines, and some of the pottery and china were broken and poorly repaired.  That didn’t seem to affect the prices, which mystified us.  Beware, there is a truly horrifying clown in this post; I’ll put it near the end just to build suspense.

Here is one of the few figurines that was intact: 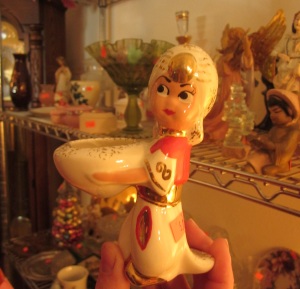 The clothing was Middle-Eastern in nature, but the androgynous figure seems fairly Northern-European in appearance.  For all of that, we thought it was cute and unnecessary, especially at $5.

The lady of the house was very crafty.  We noticed that she crocheted, sewed, and tatted.  There were a couple of sheet sets that were tatted all across the top sheet and on the edges of the pillow cases.  Did you notice all of the linens and doilies on the shelves behind the stunning (as in you will feel like you were tazered) wall hanging? 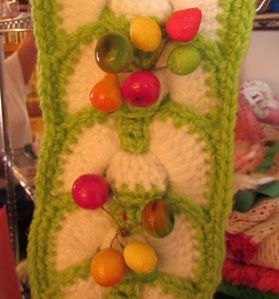 You can see that she had pretty lamentable taste.  I don’t know where you would ever hang that hot, crocheted mess–maybe on the inside of your pantry.  You sure wouldn’t want to stare at it on a daily basis.  Connie did come back and buy some of the thread for her mother-in-law; never hurts to butter up your husband’s mama.

It was appropriate that this poor kitty was directly across from the yarn: 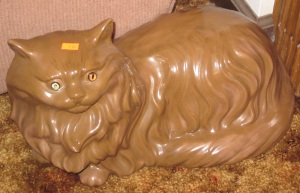 Such an unfortunate color, not to mention the eye problem.  It was another of the few breakables that didn’t have a piece broken off and glued back on cattywampus, but really, would it matter if this thing had a chip or two?  You could hardly make it worse if you tried.  We apologize to the cats of the world for putting this picture on the internet.

The kitty picture reminds me of the decor of the house–Seventies!

Those hanging lamps were in several rooms, in various colors.  I’m not sure I had ever seen three of those lights in one fixture.  You know the decor is bad when all three of us looked at the chalkware fish hanging on the bathroom wall and said “Blech!”

Here is another one of those hanging lights, this time in the bedroom: 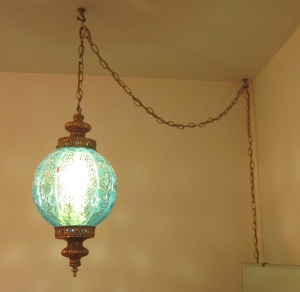 You would have to avoid that part of the room, or risk a concussion every time you walked around in the dark.  We saw a red light in the garage; it didn’t even slightly tempt us.

In the dining room, there were two Last Supper pictures: 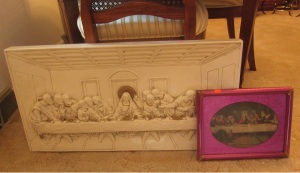 One was huge and 3D; if that weren’t bad enough, the other picture featured a blond Jesus and the frame and mat are FUCHSIA!

We saw several terrifying craft projects, some just plans, others fully realized.  Here is one sheet of paper with two bad craft projects:

I suppose of the two, the beer can hat has to be the most egregious; luckily, the crafter must have given both of these items away.  We are very grateful that we didn’t get to see the finished project.

I did buy a whole slew of booklets; they will have to be the subject of their very own post, but here’s a glimpse of what’s coming your way: 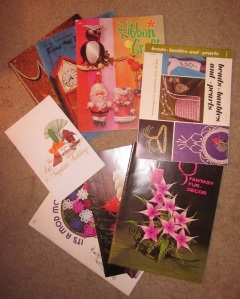 Be afraid, be very afraid.  I think my favorite is Fantasy Fur Decor, but there is something for everyone in this pile.

Getting back to what we saw at the sale, here is a pipe cleaner craft that fails on every level except comedy:

Just in case you can’t tell, they are fish–yes fish with eyelashes, made with chenille pipe cleaners.  These fish made the repainted chalkware fish in the bathroom look like Renoirs.  I’m really sorry that I didn’t take a picture of those chalkware fish; especially after mentioning them twice.

I’m not sure, but it’s possible, that this scary doll is hand-made too: 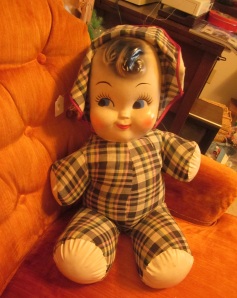 I’m just hoping that it wasn’t propped up against the pillow of a child’s bed.  I would rather sleep on the floor than in a bed with that doll!

There was some vintage clothing at the sale, including hats:

I tried the green/blue hat on and I have to say it made me look like a female Mad Hatter from Alice in Wonderland.  Not in a cute Tom Petty way either!  None of those hats work with my head or hair, so there they sat.  I encouraged another shopper to try one on after she called them cute; she did, looked in the mirror, and that hat was off in two seconds flat!

We thought this mod skort outfit was fun: 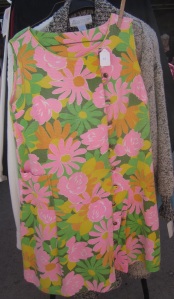 I think she made it herself, and did a good job of it.  I could see it working on the right kind of woman who had a sense of fun about fashion.  You could also pick up trash along the side of the freeway in it and be perfectly safe–it was that bright.

There were several tables out in the back–just in case you didn’t get to see enough in the house.  I ran into an old friend there:

It’s missing a few pieces (the ink pen tail, and sponge topknot) but that is the Poodle Pal from the vintage ads post.

This radio had been mentioned specifically in the sale flier.  We looked all through the house, and finally ran it to earth in the garage: 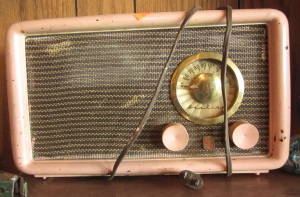 It’s pretty funny, but obviously well-loved and used.  It wasn’t for us, but we wanted to see it.  I’m not sure it would sell for $35.  Someone would have to be crazy about vintage radios, and not too picky about condition.

Finally, the moment you’ve been dreading if you have any sense of self-preservation: 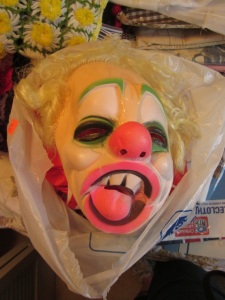 I walked right by it without seeing it; Connie called me back over to take a good gander at it–so blame her.  This isn’t a child’s costume either; the suit that went with it was adult male size.  Can you imagine the shrieks on Halloween when the man of the house jumped out of the shadows with this rig on?  If it happened to me, even as an adult, I would probably have to run home and change my costume.

To make up for the estate sale, we went to a couple of garage sales.  The last one turned out to be the best.  We all were tempted by things there, and the prices were ridiculously low.  Kathy is going to ’fess up to her big purchase:

I can’t believe I just fling money around like that!  No, I don’t need another one of these, but heck for .25, how can you go wrong?

Well, that’s all for this week.  Keep your eyes peeled for another vintage crazy and not-so-crazy craft post in the next month.

I want to do an apron give-away, so send your name and email address to:  TheSecondHandRoses@gmail.com.  We’ll throw the names in a basket and let the Summer Intern pick.  Here is the picture of the aprons:

I’m keeping the top blue one, but there are four other lovely ones just waiting for new homes.  Send us your entry by midnight Friday, May 31st and hopefully you’ll receive an email from us saying “You’re a Winner!”

10 Responses to Another Friday, Another Estate Sale